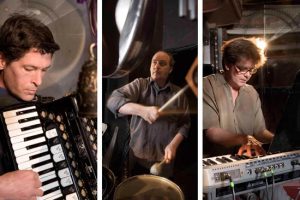 Performing at prestigious film festivals and cultural centers in the US and abroad (The San Francisco Silent Film Festival, The Telluride Film Festival, The Louvre, Lincoln Center, The Academy of Motion Pictures, the National Gallery of Art and others), Alloy has helped revive some of the great masterpieces of the silent era.

“The best in the world at accompanying silent films.” Roger Ebert

The Alloy Orchestra began scoring films in 1991 with Fritz Lang’s Metropolis. In the intervening years, the group has written scores for 32 feature length film presentations. Alloy has premiered their new scores at the Telluride Film Festival in Colorado, the San Francisco Silent film Festival, the New York Film Festival and others.