The University of Alabama at Oxford Program is entering its 38th year in 2016. With its long and successful history, the Program promises once again to provide participants with an exceptional intellectual and cultural experience. Students are housed at Worcester College, one of Oxford’s loveliest colleges. Founded in 1714 on the site of a medieval monastic college, Worcester boasts an impressive array of architectural styles, beautiful gardens and grounds, and an ideal location in the center of the city, only a short distance from both the bus and rail stations. After morning classes, students will find the city of Oxford and its surrounding area full of cultural opportunities: music in the magnificent Sheldonian Theater, Shakespearean plays in Stratford-upon-Avon, historic palaces in nearby villages, and, of course, the bustle and drama of London, only an hour away. The Program includes an exciting curriculum, organized group excursions, optional afternoon activities, formal “High Table” meals in Worcester’s Hall, and full access to Oxford’s renowned Bodleian Library.

Designed to offer students the experience of living and studying in Oxford, the Program puts special emphasis on tailoring its courses and activities to draw on the treasures and resources of the surrounding area. This year we are proud to offer six exceptional and enriching courses. Please note that participants must enroll in two courses and that any non-honors course may be taken on an honors-by-contract basis.

The Oxford Program aims to offer academically rigorous courses and to guide students in discovering the pleasures of an intellectual life. They should expect a challenging experience, one that emphasizes collaborative learning and allows them to interact closely with faculty. The Program is open to undergraduate and graduate students, by arrangement, who are registered at any two-year or four-year institution in the United States, and to other qualified persons.

Irish Studies with UA and the National University of Ireland, Galway

Plus one of the following

This summer program provides students with the opportunity to take classes in English literature at the University of Florence, Italy.

Students will be based in Wellington, New Zealand’s cosmopolitan capital, named by Lonely Planet as “the coolest little capital in the world” and the world’s 4th best city to visit. It’s also home to Peter Jackson’s film studios. In addition to class time, students on past trips had the opportunity to attend a Lord of the Rings day tour, a live session of New Zealand’s parliament, and a Super 15 rugby match at Westpac Stadium (subject to home game availability); spend a day at the Kapiti Island bird sanctuary; visit New Zealand’s national museum, Te Papa; and attend professional live theatre at one of Wellington’s three professional theatre companies.

During the middle of the program, the program will fly to Queenstown, in the heart of the South Island and spend five nights in the world’s outdoor adventure capital. In Queenstown students will have a two-day break from class and have the opportunity to take day trips to the South Island fjords (Milford Sound or Doubtful Sound), go skiing (subject to snow), and enjoy other outdoor activities.

Students participating in the University of Alabama in New Zealand program will have the option of taking two of the following three classes: 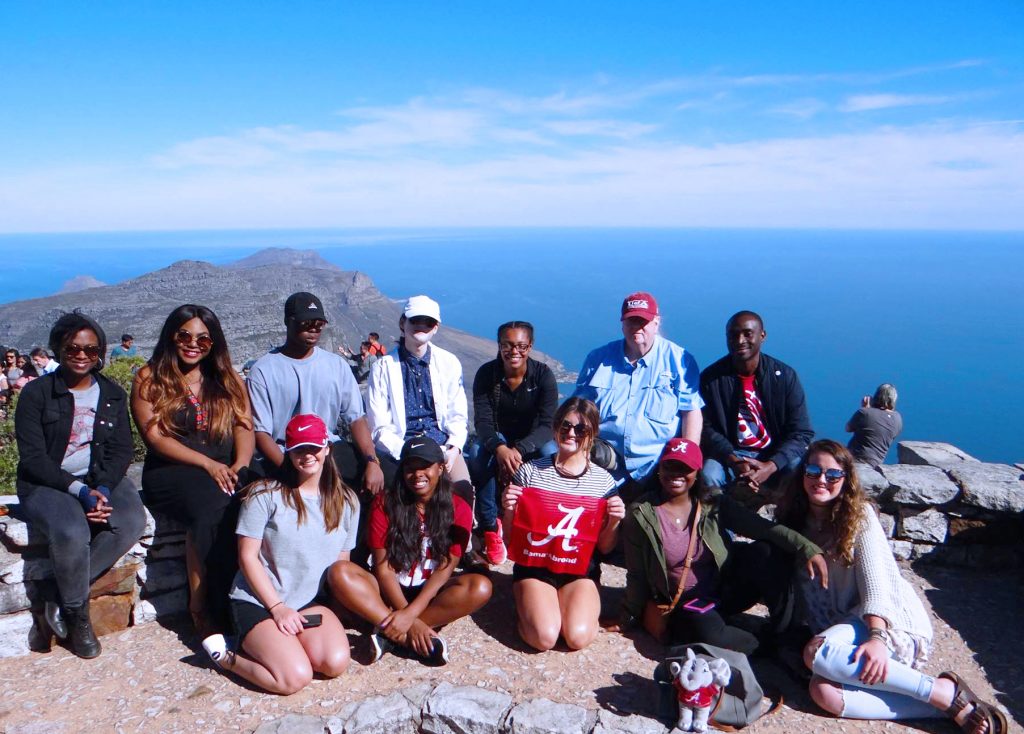 This exciting program provides an immersive experience into the multifaceted history, culture, and natural beauty of the most powerful economy on the African continent. Students will analyze the rich history and literature of the Anti-Apartheid struggle and appreciate the transformations since the transition to democracy in 1994. The participants will get the opportunity to visit scenic attractions including Pilanesburg Game Reserve, Robben Island, and Table Mountain, and explore the cosmopolitan cities of Johannesburg and Cape Town. This is an amazing opportunity to have fun while earning course credits.

Courses offered include the following:

This exciting program includes field trips, group meals, and excursions to the best of what Chilean landscape has to offer. In addition to Santiago, we will fly to Easter Island and spend 3 nights in one of the world’s most remote places, exploring the Polynesian ruins and wildlife. All courses are designed to supplement our urban and island excursions: we will write creatively and critically about our experiences; we will study contemporary Chilean literature for the geographic and cultural maps they draw; we will explore Modern World Literature and its international breadth of philosophies.

At least two of the following (3 credits each)

In this unique international interim offering, we explore literary and personal exchanges between the United States and Cuba. The course consists of an intense preparatory week and a half of coursework on the U of A campus, followed by ten days in Cuba. The fraught history of the United States and Cuba features a long and rich politically refracted literary conversation. In this course, we research this multifaceted conversation, with particular attention to novels, stories, essays, letters, poems, and films that consider the encounters and expatriate experiences of North Americans in Cuba and Cubans in the United States.

In Cuba, we stay at the historic Hotel Nacional — an object of study in itself — in central Havana. The trip includes excursions to the village of Cojimar (site of Hemingway’s Old Man and the Sea), Hemingway’s residences at Ambos Mundos, and Finca Vigía — Hemingway’s home of twenty years ­— and the site of the celebrated Hemingway Museum. We also visit and examine memorials and monuments in Havana that reflect the long and changing relationship between the United States and Cuba. Guided events include a visit to the Yoruba Cultural Center and guest lectures from some of the foremost scholars and historians in Cuba. We also plan several outings to dance and musical events that expose students to contemporary Cuba’s vibrant literary and cultural scenes.

Requirements include a term paper that involves independent research in Cuba, a travel journal, and two creative/scholarly assignments: a “Dispatch from Cuba” and a Hemingway pastiche.

The program is open to students from all disciplines. Prior knowledge of Spanish is not required. The admission process involves an interview. Interested students should contact Profs. Wittman (ewittman@ua.edu) and Bilwakesh (nbilwakesh@ua.edu).

The AL in Germany program is based primarily in Berlin and a collaboration between the German program and the Department of English.  The last week of the 5-week course of study features travel to Munich and other areas in Bavaria.  Throughout the program, the group will visit sites relating to the history of Nazi Germany and East Germany’s Communist past.  Students at all levels of German language study, including beginners, are eligible to apply for the program.  All students will be required to take a least one of the content courses that will be taught in English; Nazi Germany-Past and Present (Dr. Thomas Fox) or Communist Germany-Transnational Transgressions (Dr. Steffen Guenzel).

At a time when literary scholars emerge on both sides of the Atlantic to reevaluate the status of European and American literatures historically tied to ideologies of the nation-state, this class offers opportunities to explore and conceptualize issues and tendencies in the area of global literary studies.  Responding to the consequences of globalization, both literary criticism and comparative studies create a space in which we can address new conditions and their impact on literature. What happens when authors leave their native countries in search of understanding the larger world? How does their view of the place they have left behind change? How do they view the place where they write?

Students will study a variety of texts helping them to understand a theoretical framework that puts various literatures and cultures in a new context.  Based on new theoretical perceptions, students will explore texts by W. G. Sebald, James Baldwin, Christa Wolf, and Bruce Chatwin, and will use them as models for their own writing.  Applying theories from the study of critical essays, students will learn how changing one’s physical space can change one’s world view as part of an individual’s quest for understanding the world.

It’s not just a class; it’s an Adventure! Attend the Zanzibar International Film Festival and the Festival of the Dhow Countries. The oldest and largest lm festival showcasing African, Indian, and Middle Eastern lm, ZIFF regularly nominates competitors to the Oscars and Golden Globes. The multidisciplinary Festival of the Dhow Countries celebrates the music, dance, literature, and food of countries bordering the Indian Ocean, including Tanzania, Ethiopia, Iran, India, and Pakistan. Live in a guest house on Zanzibar Island, with easy access to Stone Town, beaches, the ZIFF/FDC festivals, and cultural attractions. Submit creative writing, art, and essays to the UA in Zanzibar Anthology. As representatives from the Indian Ocean rim and the African diaspora will be in Zanzibar for the festivals, students will have a unique opportunity to meet and interact with dozens of cultures in a brief amount of time. Students will write essays, stories, and poems about the experience. Those writings will be collected in an anthology and published by Broken Futon Press.