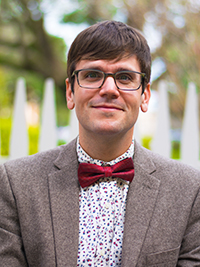 James A. Crank is an associate professor of American literature and culture at the University of Alabama, a former National Humanities Center Summer Fellow, and co-host of the podcast “The Sound and the Furious.” A contributor to the BBC as well as the PBS television show “The Great American Read,” Crank’s essays have appeared in Agee Agonistes: Essays on the Life, Legend, and Works of James Agee and Southerners on Film: Essays on Hollywood Portrayals since the 1970s, and his books include Understanding Sam Shepard, New Approaches to Gone with the Wind, and Race and New Modernisms. He is working on a monograph tentatively titled Dirty Souths: Southern Culture, Trash, and Rhetorics of Disposability, 1970-2020.

“The Hunger Games”: Southern Cookin’ in an Apocalyptic Time.” Southern Studies: An Interdisciplinary Journal of the South 22.2, Winter/Fall 2015: 34-43.

“An Aesthetic of Play: A Contemporary Cinema of South-Sploitation.” in Southerners on Film, ed. Andrew Leiter, McFarland Press, 2011, 204-216.

“Paternal Nightmare: Division and Masculinity in the Restored Edition of A Death in the Family.” Southern Literary Journal 42.2, Spring 2010: 73-88.

“The Body as Sacrifice: Ritual Violence in The Morning Watch.” in Agee Agonistes: Essays on the Life and Works of James Agee, ed. Michael A. Lofaro; Knoxville: University of  Tennessee Press: 2006, 344-370.

Editor, The Society for the Study of Southern Literature Newsletter, (2015 – present): http://southernlit.org/

Rev. of Coleman Hutchison, Apples and Ashes: Literature, Nationalism, and the Confederate States of America. Southern Studies: An Interdisciplinary Journal of the South 20.2, Fall/Winter 2013: 117-119.

“Walker Percy,” in KNOWLA: The Online Encyclopedia of Louisiana History and Culture    (2009).