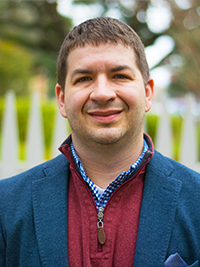 His first manuscript, “Shakespearean Boyhood: The Subversive Masculinity of Shakespeare’s Boy Characters,” finds that Shakespeare frequently subverts early modern masculine ideals, such as the chivalrous knight and the humanist man of moderation, through his gendered use of boy characters. Working with a variety of texts, from early modern drama to conduct books, midwifery manuals, and polemic pamphlets, this project questions prevailing critical notions that boys in Shakespeare  are trivial and instead proposes that they are central to understanding the playwright’s engagement with a range of masculine ideals. The project contends for a comprehensive analysis of how Shakespearean boyhood engages with historical debates concerning the definition of late medieval boyhood and manhood.

He is an accomplished amateur guitar, mandolin, and dulcimer player, and during his free time, he enjoys paddling on the Black Warrior River.

He also directs the Shakespeare Film Series at the Bama Theatre for the Hudson Strode Program in Renaissance Studies.