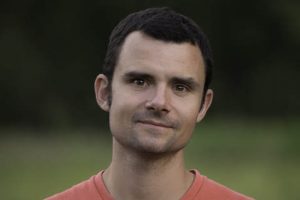 “I Am Trying to Write My Way Out of Disaster”: On Trauma, Obsession, and Writing in the Aftermath of Pain

On April 27, 2011, Tuscaloosa was struck by an EF4 tornado, one which killed 64 people, including six University of Alabama students.  In the immediate aftermath, UA English instructor B.J. Hollars and his M.F.A. cohort helped in the ways they could, moving brush and brick in an attempt to do their part to return the city to normalcy.  But as Hollars soon learned, the city’s destruction failed to capture the personal traumas many survivors faced.  Join B.J. Hollars as he recounts how Tuscaloosa’s writing community joined together to document the disaster, not only for history’s sake, but for more personal reasons: to confront trauma, explore exploitation, and employ words as a means to healing.  Hollars, too, will address how traumas of racial, political, and environmental natures have informed his own work, and how to create power out of pain.

B.J. Hollars is the author of several books, most recently The Road South: Personal Stories of the Freedom Riders,  Flock Together: A Love Affair With Extinct Birds, From the Mouths of Dogs: What Our Pets Teach Us About Life, Death, and Being Human, as well as a collection of essays, This Is Only A Test. Additionally, he has also written Thirteen Loops: Race, Violence and the Last Lynching in America, Opening the Doors: The Desegregation of the University of Alabama and the Fight for Civil Rights in Tuscaloosa, Dispatches from the Drownings: Reporting the Fiction of Nonfiction, and Sightings.

Hollars serves as a mentor for Creative Nonfiction, and the  founder and executive director of the Chippewa Valley Writers Guild. An associate professor of English at the University of Wisconsin-Eau Claire, he lives a simple existence with his wife, their children, and their dog.