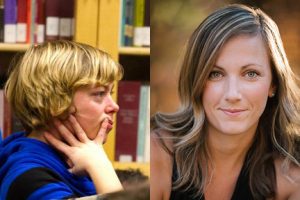 Tessa Fontaine is the author of The Electric Woman: A Memoir in Death-Defying Acts, a New York Times Editors' Choice, finalist for the Utah Book Award, and best book of 2018 from Southern Living, Amazon Editors', Refinery29, PopMatters, and the New York Post. Other writing can be found in The New York Times, Glamour, The Believer, LitHub, and Creative Nonfiction. Tessa won the 2016 AWP Intro Award in Nonfiction, founded Salt Lake City's Writers in the Schools program, and has taught in prisons and jails around the country. She currently lives in North Carolina, where she teaches creative writing at Warren Wilson College.

Jessica Lee Richardson performed Off-Broadway and elsewhere for years before earning her MFA from the University of Alabama in 2013. Her collection, IT HAD BEEN PLANNED AND THERE WERE GUIDES, won the FC2 Ronald Sukenick Prize and was longlisted for the PEN/Robert W. Bingham Award. Stories have appeared in Adroit, BOAAT, the Indiana Review, Joyland, PANK, the Rupture, Slice Magazine and others. She now dodges reptiles in the lowcountry with her partner, Yasu, and their sweet lab, June, found at a post office by Bama’s own Kyes Stevens. She sometimes misses T-town so much she howls a little.