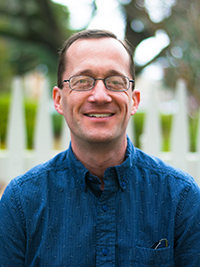 Albert Pionke joined the faculty in 2005 as an assistant professor. He was awarded tenure and the rank of associate professor in 2009, and was promoted to professor in 2014. Between fall 2016 and spring 2019, he served a three-year appointment as a College of Arts and Sciences Leadership Board Faculty Fellow.  In February 2019, he was named the William and Margaret Going Endowed Professor of English.  Since January, 2022, Pionke has been co-editor of the Victorians Institute Journal, which invites submissions from both established and emerging scholars of Victorian and Edwardian literature and culture.

A Victorian specialist with interests in cultural, imperial, intellectual, literary, and social history, as well as bibliography, pedagogy, and the Digital Humanities, Pionke is the author of Plots of Opportunity: Representing Conspiracy in Victorian England (2004), The Ritual Culture of Victorian Professionals: Competing for Ceremonial Status, 1838-1877 (2013), Teaching Later British Literature: A Thematic Approach (2019), and Victorian Fictions of Middle-Class Status: Forms of Absence in the Age of Reform (forthcoming); the co-editor of Victorian Secrecy: Economies of Knowledge and Concealment (2010), Thomas Carlyle and the Idea of Influence (2018), and The Socio-Literary Imaginary in 19th and 20th Century Britain: Victorian and Edwardian Inflections (2020); and the general editor of the COVE Edition (2021) of William North’s The City of the Jugglers; or, Free-Trade in Souls: A Romance of the “Golden” Age (1850).  He has also published articles on Victorian fiction, nonfiction prose, and poetry in many of the field’s leading journals, including Dickens Studies Annual, ELH, Philosophy and Literature, Studies in the Novel, Victorian Literature and Culture, Victorian Periodicals Review, Victorian Poetry, and Victorian Studies.  Pionke has secured external grants from the Andrew W. Mellon Foundation, the Gladys Krieble Delmas Foundation, and the NEH.

Working collaboratively with the Alabama Digital Humanities Center, Pionke is also currently engaged in a project to digitize and make fully searchable all marginalia in Somerville College’s John Stuart Mill Library. Visit the home page of Mill Marginalia Online, and begin your own search through the marks and annotations with which James Mill, John Stuart Mill, and others recorded their own experiences as readers.