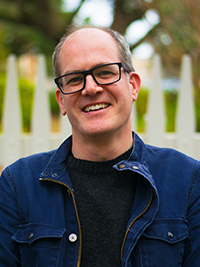 I joined UA English in 2007 and teach courses in Irish studies and modernism, postcolonial and critical theory. I’m particularly interested in experimental literary and artistic forms, how such works help us to diagnose the cultural, political, and economic systems we inhabit. In 2013, I was awarded the University of Alabama’s Outstanding Commitment to Teaching Award. I serve on the editorial advisory board of Modern Fiction Studies. I founded UA in Ireland.

I take an immanent approach to literary writing both in the classroom and in scholarship. This means I like when we read works very closely and sympathetically, unfold them initially in their own terms, yet pay careful attention to the contradictions within the work itself and between the work and the world. This kind of interpretation is useful for recognizing an artwork’s political aesthetic. It opens up literature to history through aesthetic form. And it also allows us to ask how literary works change meaning, or even cease to mean, as the world in which they are encountered changes. I model this approach in my book, Samuel Beckett and the Politics of Aftermath (Oxford University Press, 2018), which elaborates Beckett’s political imagination response to Irish liberation, Nazism, Stalinism, and Vichy France. In 2019, I co-edited a collection of essays on Beckett’s work that investigates its influence in other charged political situations: in North Africa, say, or in the Middle East.

I also write on Irish poetry and visual art. And I write essays as well.

I have several projects under way. Among them, I’m co-writing a book on Todd Phillips’ Joker, which reads the film to elaborate the function of melodrama in neoliberal economic theory and the recent global authoritarian turn. I’m finishing a project on Casement, Joyce, and Beckett that tracks their works’ responses to rubber genocides: from the Congo to the Peruvian Amazon to Auschwitz. And I have edited and introduced an art book Sean Hillen: In-sufficient Evidence that currently seeks a publisher.