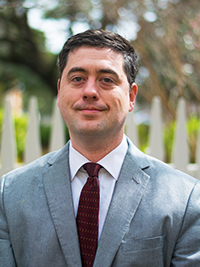 Van Newell received his BA from the University of Montevallo, his MFA from Columbia University, a Certificate from the Act One Writing Program, and is currently finishing an EdD in Higher Education Administration from The University of Alabama. In 2003 he was awarded a fellowship from the US Department of Education America Reads program. His teleplay “The Quick and The Wet” was nominated by Columbia Film School for the David Angell Humanitas fellowship. He was also a finalist for the Warner Brothers Writing Workshop. He is the winner of the Hackney award and an award from the Alabama Writers Conclave in addition to being nominated for a Pushcart Prize. His writing has been published in The Black Warrior Review, The Lascaux Review, Medium, The New Guard, Weld, Postscript, Cumulus, Aura, Writersforum.org, First Draft, Birmingham Arts, and Ala-lit.com.