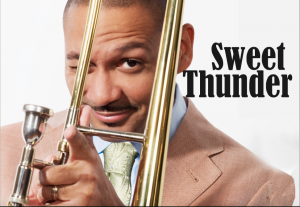 Last November, The University of Alabama played host to the “Shakespeare and American Integration” a symposium linking two topics that, at first glance, may seem dissimilar through an unlikely musical commonality. I had the opportunity to sit down with Professor Sharon O’Dair, director of the Hudson Strode Program and organizer of the symposium, for an enlightening discussion of the event.

Could you briefly describe the symposium?

“Shakespeare and American Integration” began a discussion that we hope will continue about how Shakespeare was played and deployed in America during the 1950s and 1960s. Lectures addressed Shakespeare and Duke Ellington, James Baldwin, Cole Porter, Joseph Papp, and Malcolm X, among others. And we were fortunate—and thrilled—to organize a concert by Delfeayo Marsalis and his octet, who performed Marsalis’s reworking of Ellington’s “Such Sweet Thunder” at the Moody Concert Hall. Those who missed that, missed something!

What gave you the idea to pair Shakespeare with American Integration?

The University’s commemoration of the 50th anniversary of this campus’s integration spurred me to think of how The Hudson Strode Program in Renaissance Studies and the Department of English might contribute to it. I knew both that Shakespeare played a role during this time and that I didn’t know enough about it!

What was the greatest challenge in organizing this event?

Dealing with a professional musician’s agent and the contracts necessary to secure his participation. At one point the agent said, “now you can be an impresario!”

What was the most rewarding aspect?

For me, as organizer, the most rewarding aspect was and is knowing that there’s so much more to be learned and discovered about African-American intellectuals, activists, and artists engaged with Shakespeare during this tumultuous and deeply significant period of American history. And how much more there is to be learned and discovered about how ordinary folks during this period engaged with Shakespeare through their schools and their local theatrical productions.

If you had had more time or resources, what else would you have liked to include in the symposium?

I would have liked to have been able to bring in the voices of African-Americanists who were young during the late 1950s and 1960s, those who have become leading figures in African-American studies. And more local and regional theater history. Just more!

Are you planning any similar events in the future?

The Hudson Strode Program in Renaissance Studies sponsors many lecturers during the academic year, and we hope you will take advantage of our offerings! But after organizing two symposia during 2013, we are taking a break for 2014.