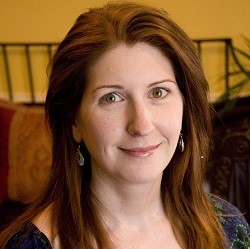 Michelle Dowd joined the University of Alabama in the fall of 2016 as Hudson Strode Professor of English and Director of the Hudson Strode Program in Renaissance Studies. Before joining the faculty at Alabama, she taught at the University of North Carolina at Greensboro and at Fordham University. Her work primarily concerns the intersection of economics and gender in Renaissance drama. Her last book, The Dynamics of Inheritance on the Shakespearean Stage, was published by Cambridge University Press in 2015. She is currently working on a new book-length project, tentatively titled Shakespeare’s Working Words. Here are some highlights from a recent conversation.

Your new book is Shakespeare’s Working Words. What is your goal?

This new project came out of a review essay I was invited to write on Shakespeare and work. While there’s been interesting scholarship written on Shakespeare and labor, most of that scholarship has focused on scenes in plays in which a character works or is overtly described as a worker so, for instance, the mechanicals in Midsummer Night’s Dream, the laboring characters in the second part of Henry VI, the Tempest where characters are carrying logs on stage. Not surprisingly, scholars have gravitated toward those scenes. So the question that I asked in the review article was, “How might we be able to expand our understanding of how Shakespeare is engaging with labor and the world of work by thinking beyond mimetic, staged representations to think about language, the language of work that permeates the plays, and are there ways in which we might see labor having a fundamental role in plays that have no overt scenes of labor, including tragedies, which we don’t normally associate with daily work?” As I mulled it over, I thought “maybe that would be something I should work on.” That’s where the project began. I’m thinking in terms of creating—or uncovering perhaps—a philology of work that Shakespeare is utilizing in the drama.

Part of the scholarly discourse still assumes that Shakespeare is not interested in everyday labor. Even though there’s been lots of scholarship that has debunked that discourse, it is still the predominant view—perhaps in part because he didn’t tend to write overtly about the city and the urban economy. Using a different reading strategy, I think we can uncover a broader sense of Shakespeare’s engagement with work.

What is your writing process?

That depends on what time of year it is. The writing process sometimes has to take a backseat to other activities. When it’s going well, I tend to write in a systematic way. For the past couple of years, I worked with a page-a-day mentality. This approach works well, if I give myself enough time. Like many academics, I have more time to write in the summer. I remember talking to former graduate students about books, which advertised “write your dissertation in 10 minutes a day,” and I was always a little skeptical, but I’ve found versions of this strategy to be helpful. Having a smaller but definite goal keeps me motivated. I don’t write my best if I leave it until later.

I think that for a general audience, there is a basic misunderstanding that there weren’t any women writers, or at least there weren’t any of note. Sometimes undergraduates are surprised that there are so many early modern women writers on the syllabus. Beyond women’s presence in the early modern canon, I’ve been thinking about literary popularity. One tendency is to think, “we’re only recovering these women writers in a certain post-feminist moment; they weren’t actually popular in their own time.” Neither of these beliefs is true.

Many were writing in genres that are not as popular now—religious writing, pamphlet writing—but which were extremely popular then. Dorothy Leigh’s The Mother’s Blessing, which was an advice book on motherhood, went through multiple editions. It was one of the more popular texts of the period. We are then reminded of what people believe warrants literary value. Because our references have been so dominated by figures like Shakespeare and Milton, we often have a harder time uncovering other writers of that time.

I first became interested in Renaissance literature through theatre. In elementary school, I took some acting classes.  Then, around sixth grade, I saw a production of The Taming of the Shrew. It was the first Shakespeare play I had ever seen, and I was sort of blown away; I didn’t quite understand how I was being influenced by the play. It was a high-quality production, and the gender politics of the play intrigued me, as well as the vitality of it. At the time, the name “Shakespeare” just meant some boring text that I hadn’t read yet. I had no idea that it was so vital and vibrant. So, after that I became an early, avid reader of Shakespeare even in junior high and high school because of that performance. I still feel really strongly that for students, especially undergraduates who have not had many opportunities to see theatre, these productions can be really transformative in terms of how they engage with older plays. Seeing early modern drama live is something you can’t really replicate.

What advice do you have for undergraduates majoring in English?

If you’re interested in the past, go see live theatre. When I teach Shakespeare I tell undergraduates that we tend to think of going to a play as an elite, high-culture experience. But in Shakespeare’s day, going to the theatre was sort of lowbrow. We, in some ways, put ourselves in that position by going more frequently, or going to the theatre when it’s not a really “fancy-dress affair,” elite affair, or expensive affair. Seeing theater live gives students a broader understanding of drama’s possibilities.

What do you find most rewarding about a career in English?

There is something extremely rewarding and amazing about being able to revisit, over a career, a beloved text with students, and to see these texts afresh. Every time I teach a play, it’s always different because of the students. And I’m reading it differently because I have had new experiences, too. Maybe I’ve seen a production, and that’s now changed my experience of the text. So the ability to revisit those texts, and to grow through student engagement is enormously rewarding. To be able to see how these texts really do have an afterlife that is dynamic and ever-changing—for me that’s why I love what I do. It’s not a predictable path.

What is your greatest strength as a teacher?

I think that I am a good listener, and I try to approach students from where they are. They might be hostile toward Shakespeare because they have had a bad experience, or they might come to the classroom at a more advanced level. These positions are all worthy of my full attention.

That’s true for graduate students as well. Here, we have an M.A. program and a Ph.D. program, and maybe students in the Ph.D. program are more advanced, while another student just came out of a B.A. program, where they had different experiences. Graduate students can be particularly anxious about what they don’t know. I try to remind them of what they do know. A student might think, “this person knows so much more than I do,” but that student has knowledge and experience, too. I encourage students to build on what they have already and not to discount themselves. I get students to build on their strengths rather than follow a cookie-cutter model.

Tell me about that transition to Tuscaloosa.

The transition has been really wonderful. I feel welcomed here, and it’s so exciting to come into this program, which is so well-known in Renaissance studies. It’s exciting to have a large cohort of students and faculty who have such wide-reaching interests in the early modern period.

It’s fun to be in a college town like Tuscaloosa, where there are so many talks and readings that are affiliated with the Department of English. The university itself sponsors so many events—whether it’s in the arts and theatre, or lectures. It’s exciting to be a part of this community and I am enjoying my life here.