Associate Professor Steve Tedeschi joined the English department at The University of Alabama in 2011. His recent book, Urbanization and English Romantic Poetry, was recently published by Cambridge University Press.

What inspired you to write Urbanization and English Romantic Poetry?

I have been fascinated by Romantic poetry since I first encountered it, and the question of its relation to urbanization allowed me to reflect on method, the history of the period, and the transformations of literary genres. 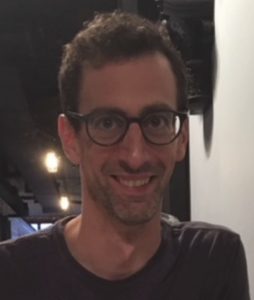 I tend to associate Romanticism with rural settings like those in Wordsworth’s “Tintern Abbey” or Coleridge’s “This Lime-Tree Bower My Prison.” Why focus on urbanization?

The Romantic period occupies a critical moment in the history of the urbanization of England. For centuries, the proportion of the population of England living in cities had been rising. Eighteenth-century political economy blithely associated urbanization with historical progress, and despite a long tradition of a rural bias in the genres of poetry, English poets adapted their figural repertoires to celebrate urban—and especially metropolitan—commerce.

Two phenomena in the Romantic period turned urbanization into an urgent concern in public discourse. Images of political violence—first in the Gordon Riots in London in 1780 and then in revolutionary Paris—intensified concerns about class tensions in cities, and urbanization metastasized out of the metropolis and port cities in the form of manufacturing towns, some with notoriously squalid working-class districts. Romantic-period authors felt an urgent impulse to reexamine the political, social, and cultural consequences of urbanization.

In today’s discourse on social geography, the Romantic poets tend to appear, if at all, as champions of rural life or of unspoiled nature and as critics of urban environments and lifestyles. I think this impression misrepresents their thought and poetry. There is a decisive difference between criticizing a historical form of urbanization—the specific way in which cities are taking shape—and criticizing urbanization per se. I argue that the Romantic poets question the historical form of urbanization, especially the social inequalities it reflects and perpetuates, and imagine new forms of urban community. The stakes of this misreading are high for Romanticists: social geography is one of the few realms where the works of the Romantic-period poets continue to influence public discourse and the public imagination. If we recognized that the poets were interested in, say, the quality of human relations rather than just the density of development, we might find more value in their sketches of the possibilities of urban life as we move into an increasingly urban future.

Often, the rural/urban divide correlates with a class divide. How does class figure into your thinking about urbanization?

The urban theory I find most compelling builds on Marxist foundations, such as the work of David Harvey, Henri Lefebvre, Manuel Castells, and Mike Davis. Harvey in particular lucidly shows how the pursuit of capital accumulation shapes the built environment. In doing so, he shows how flows of capital inscribe class divisions into social geography, whether urban or rural. After the Gordon Riots and the events in Revolutionary Paris, cities in England were understood to magnify both the powers of social and political discipline and the resources available for the organization of a political insurgency. Urbanization in the Romantic period simultaneously continues what Peter Borsay calls the English urban renaissance—a trend in the long eighteenth century in which capital derived from agriculture flowed into luxury spending and development in English cities—and intensifies the development of slums, both in London and in the great manufacturing towns. Poets were acutely aware of these divisions and, like contemporary urban theorists, speculated about what could be done to channel or discharge the tensions between classes.

Beginning in the mid to late seventeenth century, Londoners began addressing the problem of pollution, and especially the smog produced by burning coal. How does your book address ecological concerns of urbanization?

I find that when the Romantic poets think about urbanization, they focus first on economic and political processes. But they also recognize that these processes have clear ecological consequences. I suspect the Romantic poets would call our ecological moment not the anthropocene—what is human, after all, is so malleable—but the capitalocene. The poets I study in this book recognize that our ecosystem is shaped by our political economy. 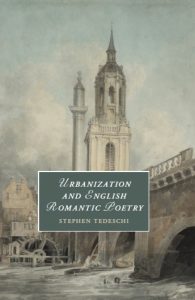 What surprised you most while researching and writing the book?

My most jarring discoveries were belated recognitions of ideas that I had been working with for months but had not fully understood. Every idea and its ultimate written expression appeared to me like little epiphanies.

Is there anything you wished you had included in the project but couldn’t and/or didn’t?

Scholarly work is necessarily limited. I would have especially liked to work out into greater detail the influence of urbanization on the practices of the publishing business, and I would have liked to discuss the poetry of Anna Seward and Robert Southey.

What was the most difficult aspect of writing this book?

Tell me about the cover art.

The image on the cover is J. M. W. Turner’s London Bridge, with the Monument and the Church of St Magnus King and Martyr (1794-5). I bought a license to use the image from the Tate. I happened upon it while skimming through images, looking for a possible cover. It caught my eye simply because it was beautiful. But the more I looked at it, the more it seemed to fit with the themes of the book. The Thames flows in the foreground. Mechanical power and labor power seem primed for action: a waterwheel turns in the background and laborers stand by the piers of the bridge. Above, London Bridge channels flows of traffic into and out of London. The bridge is elevated above the river; like the city itself, it is a human structure built over and supplementing a natural environment. The church of St Magnus King and Martyr was for a century the symbolic gateway to London, a landmark beside the bridge that leads into the heart of the city. Its clock, projecting from the wall of the church over the road, was donated so travelers on the bridge could know the time, a sign of control increasingly seeping into urban affairs. Finally, smoky clouds rise from the city, turning the sky the same gray-blue as the water. The clouds taper and lighten like the spire of Wren’s church and all but absorb the monument to the Great Fire, as if Turner understood that the city demonstrates that all that is solid melts into air.

What might someone without an expertise in Romantic poetry get from your book?

I think the book not only counters some of the uncritical assumptions that inform much of the criticism on the city in literature but also offers a new and transferable method for relating changes in genre to changes in social geography. I also hope that the book will help to change the place of the Romantic poets in contemporary public discourse about social geography.

I have been working on a book provisionally titled Shelley and Regency Print Production. No study has examined Shelley’s works from the perspectives of media studies, book history, and material culture. Over the last thirty years, scholars have generated an amazing outpouring of textual scholarship on Shelley’s works, compiling two sets of the complete poems, annotated facsimile editions of his notebooks, and a new edition of his complete prose. Yet few monographs have assimilated this wealth of new or newly available information into a sustained reading of Shelley’s writings. In Shelley and Regency Print Production, I want to reconstruct Shelley’s understanding of print production and his contemporary media ecology and to explain how this understanding informs the form, structure, style, and figures of his major works. I have drafted a preliminary introduction, and I have been toiling on a chapter centered on Epipsychidion (1821).