Natalie Loper earned her BA in English from Quincy University and her MA and PhD in English from the Hudson Strode Program in Renaissance Studies at The University of Alabama. Her teaching and research interests include Shakespeare and film, teen films, adaptation and appropriation theory, and pedagogy. Her duties as Assistant Director of the First-year Writing Program include creating and coordinating the 100-level online courses and training graduate student teachers and online instructors.

Who were your collaborators on this book? 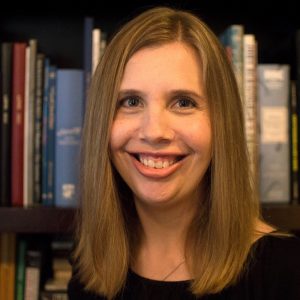 My co-editors, Christy Desmet and Jim Casey were foundational to the birth of this book. Christy passed away in July 2018, to the shock and dismay of those who knew her. Christy was a well-known figure in two academic fields: Shakespeare and First-Year Writing. She showed me that it’s possible to be active in both of these fields, and she was a kind and generous friend and mentor.

Our book, Shakespeare/Not Shakespeare, began as a seminar at the annual Shakespeare of Association of America conference in 2014. Christy directed the seminar, called “Accidental Shakespeare.” My colleague and fellow Strode alum, Jim Casey, and I were both participants. Afterwards, we discussed the possibility of keeping the conversation going through a book. We worked well as a team, and I am proud of the work that we did.

What do the essays in your new book, Shakespeare/Not Shakespeare, identify as some of the main concerns with contemporary adaptations of Shakespearean plays?

Our book is primarily concerned with where we draw the line pertaining to studies on where we
draw the line between what should or should not be considered “Shakespeare.” For a long time, the
division seemed pretty rigid. Scholars developed strict taxonomies that determined what was
acceptably “Shakespearean.” This model was focused on a narrow view of the text, which we now
see as a far from stable entity. When I began writing my dissertation on Shakespearean teen films in
the mid-2000s, I had to defend why I thought movies are a legitimate genre to study, but now films
like 10 Things I Hate About You are not questioned as part of the sphere of “Shakespeare.” One
theory that we draw on heavily in the book is Douglas Lanier’s description of the Shakespeare
rhizome (which he derived from Deluze and Guattari’s A Thousand Plateaus). Instead of an arboreal
model, with the author-trunk (text) looming over all, a rhizome uses a horizontal movement, with
multiple nodes and offshoots that are all on the same level. When someone identifies something as
“Shakespeare,” it becomes part of the Shakespeare rhizome. But where do we draw that line? Can
everything be considered Shakespeare if even one person says it reminds them of something they
read in one of his plays? That thinking can get sloppy, so we are concerned about how to be smart
and intentional about attribution and nomenclature.

We provide some rough categories for how Shakespeare shows up in different adaptations: networks
and pastiches, memes and echoes, texts and paratexts, celebrities and afterlives, and accidents and
intertexts. Many essays and examples could fit into multiple categories, but the idea was to
show the range of “Shakespeare” and/or “Not Shakespeare.” The book includes examples from
television, films, anime, novels, and comics; celebrities and historical figures share the stage with
works directed at different audiences worldwide. Throughout, the essays examine what Christy
called the “rabbit-duck” of Shakespeare: sometimes, it’s Shakespeare and sometimes, it’s not.
Sometimes, it’s both simultaneously.

Do you think Postmodernism’s “tinkering” with Shakespeare provides new layers of meaning to old works, or does it mostly just reroute storylines and character development?

There’s always room for new possibilities and new readings. That’s one reason
Shakespeare’s plays are so popular: there’s no one reading of any of the plays. It depends on the
performers, the director, the audience, the editorial decisions, the political climate—everything. As
anyone who has acted knows, you can do the exact same show twice in one day and get a totally
different response from your audience. I recently taught The Taming of the Shrew, and it’s a
particularly interesting historical moment to teach it. Critics have always found the gender dynamics
problematic, but my students today pick up on the abuse and brutality even more than they ever
have. We watch versions of the same scene from different productions and films, and it’s fascinating
to see how you can take the same characters and situation and make the play a farce, a romance, a
slapstick comedy, a subtle display of gaslighting, or an overt example of sexual violence. Many of
my students think Petruchio is absolutely evil, and I don’t think I’ve ever heard this before from so
many people. Although we still have a long way to go, the #MeToo and #TimesUp movements are
bringing about a cultural shift in recognizing and confronting sexual violence. It also makes me
wonder what the next major adaptation will do with that play. 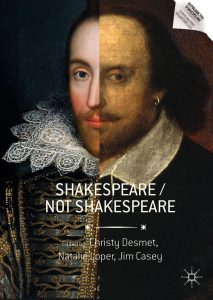 What is your favorite contemporary re-envisioning of Shakespeare’s work?

I really like some of the newer adaptations, but I keep going back to the film that made me want to study Shakespeare for the rest of my life: Baz Luhrmann’s William Shakespeare’s Romeo + Juliet. This sounds silly or cliché, but I saw it in high school and fell in love. When I saw Luhrmann’s The Great Gatsby in theaters a few years ago, I kept seeing echoes of the earlier film—down to particular shots of Leonardo DiCaprio’s face. I started thinking of Jay Gatsby as a sort of grown-up Romeo, Daisy as Juliet, and Tom Buchanan as Paris. What would have happened had Juliet listened to her father and married the more socially acceptable man? This led to my essay in the book, which was really fun to write.

How do you think Shakespeare would react to contemporary re-envisioning of his work?

I think Shakespeare would be deeply engaged and involved. Shakespeare was an adapter who drew
from all sorts of sources and incorporated them in his plays and poems. He would probably be busy
creating and collaborating with other artists. My dream project would be a collaboration between
Shakespeare and Lin-Manuel Miranda. I think they’d work really well together. Maybe they’d let me
sing in the chorus.