Robin Behn, originally from Barrington, Illinois, has served as faculty in the Department of English for the last 30 years. She is the author of five volumes of poems, Quarry Cross, The Yellow House, Horizon Note, The Red Hour, and Paper Bird, and two chapbooks. She is co-editor of The Practice of Poetry: Writing Exercises from Poets Who Teach, and editor of a new resource for young writers, Once Upon a Time in the Twenty-first Century: Unexpected Exercises in Creative Writing. Robin Behn teaches in The Program in Creative Writing at The University of Alabama and lives in Birmingham. Behn also plays flute and pennywhistle and has written the libretto for the opera, Freedom and Fire! A Civil War Story. 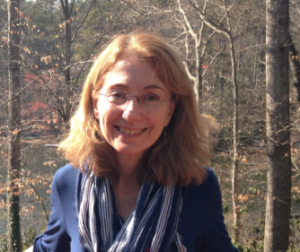 According to Behn, she began writing poems and studying music around age 10 and has found ways to combine them ever since. Her poems pay attention to sound, and over the years, she’s written about playing music, musicians, and the nature of music. Some of the poems in Quarry Cross are intended to be accompanied by music. Behn plays both the flute and the pennywhistle, and she often plays these instruments during her poetry readings.

The title poem, “Quarry Cross,” like several poems in the collection, is paired with the music score of a traditional Irish tune that inspired the poem and bears the same title. Book notes direct interested readers to Behn’s website, robinbehn.com, which includes sound recordings and video of Behn and other musicians playing the tunes and Behn reading the poems “inside” the music. But the words of the poem have no problem standing alone: “My mouth on your ear, my shadow worn sheer, Your dust in my voice, this kingdom of choice,” is a beautifully crafted line from the poem.

Quarry Cross is a unique collection.  Most of the other poems in the book, about a wide range of subjects, are in free verse. Here’s a passage from her poem “Tuscaloosa and Beyond” about the EF4 tornado that hit Tuscaloosa: 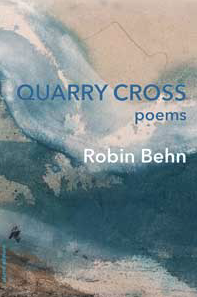 now we see straight through from Hargrove to 15th,
from have to have not, from ravishing to rending,

this peel-back to the core of….?
O larger language O havoc-house O earth

The book Once Upon a Time in the Twenty-First Century: Unexpected Exercises in Creative Writing, edited by Robin Behn, is forthcoming from The University of Alabama Press. It was born out of the Creative Writing Club at The University of Alabama, founded by Behn in 2004, in which MFA students have taught creative writing to local high school students after school. The book is a compilation of original creative writing exercises created by UA MFA students in the Creative Writing Club over the years. Behn says the book has a wide range of inviting exercises, uses an informal voice to speak directly to young writers, and that it will be a wonderful resource for both high school and college students to use in their classes and on their own.

Behn is a writer and musician who believes teaching is essential to writing and vice versa. Likewise, she also asserts the benefits of creative thought to expand critical thinking in any field and to enrich our personal lives.