Serena Blount earned her bachelor’s degree from Mississippi University for Women and her master’s and doctoral degrees from the University of Alabama in the field of American Literature. She lives in one of Tuscaloosa’s historic districts and is currently compiling historical documents relating to the settlement of Newtown, which slightly predates the establishment of Tuscaloosa, and which was once Tuscaloosa County’s primary commercial center. She recently spoke with UA MFA graduate and instructor, Heather Wyatt.

What is it about Tuscaloosa that made you want to explore its history? What connection do you feel to this place? 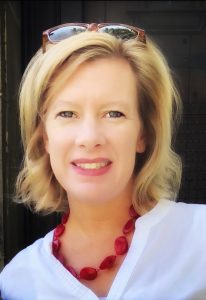 My entire childhood was “old stuff” immersion, and I’ve always been interested in the odds and ends of local history. I grew up in a home built in 1858, complete with a cemetery in the yard, and my mother is an antiques dealer. I lived in Historic Downtown Northport for almost a decade before moving to a Tuscaloosa historic district; I think I just have an old soul and a predilection for generations past. Tuscaloosa is a city in which there are many families who have been here for generations, and often, when I find myself among those people, I feel a bit left out—like an outsider, even after living here for twenty years. But I love to be among those people, because they give me insight into generations of people and places who make up this town and its charms. I just love all of the clubs here—reading and sewing and bridge and secret clubs and so on. So I would say that curiosity was the driving force behind doing the book and maybe a desire to feel a greater connection to Tuscaloosa’s wellsprings and to help foster others’ affections for the town. Especially during a period when the town has experienced population growth, there’s a bit of a disconnect between newcomers and area history, it seems. I wanted to provide that sense of connection for those interested in exploring the city.

What was your most surprising find about the history of Tuscaloosa as you were writing the book?

One of the most interesting stories that I ran across was about the Fitch House, which is located quite near to my house, on 6th Street in Newtown. The builder of that house was a violent drunk, who married one of Dr. Drish’s (of Drish House fame) daughters and later killed her by slashing her throat. I only found that story in one source, though. As a scholar of early American literature, I’m all kinds of intrigued by the dark 19th century underbelly of Tuscaloosa. Since we are in our bicentennial year, another interesting bit of trivia is that even though Tuscaloosa was incorporated in 1819, the city celebrated its centennial in 1917, to commemorate the year when the first white settlers moved to the area. And it was quite a fête, too! However, the Native American settlements that predate European settlements in this area are also fascinating. An early historian’s account of the first white settler in this area is actually a kidnapping story. Local Native Americans apparently kidnapped her from her farmstead in southern Tennessee and then brought her back to their settlement here to work for them. There are also accounts that suggest Davy Crockett spent at least a few nights camped in the Native American village sites here during the Creek wars. Those sites were located well to the west of our current city center.

What is the most important piece of history Tuscaloosa citizens should be aware of to understand their sometimes blotted past? How is understanding those moments crucial? 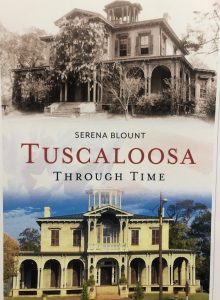 It was very important to me to include in my book sites that demonstrate a cross-section of Tuscaloosa’s past. Nott Hall, for example, is named for Josiah Nott, whose theories of polygenesis were quite influential, and detrimental, in his time. But not far from Nott Hall is Hunter’s Chapel AME Zion Church, which operated a school for freed slaves during Reconstruction. Foster Auditorium, where George Wallace’s famous Stand in the Schoolhouse Door took place, is nearby as well. At First African Church, downtown, one of Tuscaloosa’s most violent altercations during the Civil Rights movement unfolded. Further west, Stillman College’s library’s front columns are graced by the capitals that once adorned the plantation house on that site—a house which Stillman (a Historically Black College) used as its main building for many years. Expanding my understanding of how varied and complex the experiences of Tuscaloosans have been gives me a greater appreciation for the various perspectives of citizens here, especially those who have lived here for many decades. Proximity matters—when we view everything from a removed perspective, it’s easy to remain callous and shallowly objective about matters that don’t directly involve us. Get closer, and you start to care.

How did writing Tuscaloosa Through Time connect you to Tuscaloosa locals?

I did talk to many locals while I was working on the book, and I learned all kinds of information about different communities and neighborhoods within the city, and in some ways, the city just shrunk right up the more I talked to people because so many people are connected. There is a strong sense of community here, and I was surprised repeatedly by the connections that I found among people whom I would have thought were strangers. It is endearing. One of my neighbors is a hobby historian, and I have particularly enjoyed poring through his papers and books and research and listening to him talk about Tuscaloosa’s history.

How has writing the book influenced the way you teach?

I wouldn’t say that it has influenced my teaching much except that I do find myself using Tuscaloosa examples for larger points that I am trying to make sometimes. For example, I am currently teaching 19th century American literature in Nott Hall, and just this morning, on a whim, and in the midst of emerging from The Adventures of Huckleberry Finn and diving into Booker T. Washington’s Up From Slavery, I had my students briefly research the namesake of Nott Hall so that we could have a brief discussion of his theory of polygenesis.

I am always encouraging my students to go out and explore the city, something it seems most of them don’t do. I will say that my children are pretty conversant with their town’s history, and my middle son includes Tuscaloosa Trivia as part of his afternoon announcements every week at school.

My next project will be a history of New Town, the area of West Tuscaloosa that lies between Stillman Boulevard, Martin Luther King, Jr., Blvd, and the river. New Town was once a separate municipality, incorporated almost exactly a year after Tuscaloosa was. But because it had been surveyed, while Tuscaloosa had not, people could get deeds to their property there, and so it grew at a faster rate than Tuscaloosa. Also, it was originally settled mostly by New England and mid-Atlantic transplants, and their leanings were quite liberal for the time. There were several Free Men of Color who lived in New Town and owned businesses there. It was also the first site of the Tuscaloosa County Courthouse and county jail. I’m looking forward to adding flesh to the names, events, and addresses associated with this area.

Tuscaloosa Through Time is available from Arcadia Publishing: