Modern gynecology and obstetrics blossomed under deeply rooted racism. UA alumna Kwoya Fagin Maples captivates her readers with her new book of poetry, Mend, as she explores Black women’s unacknowledged and forgotten wounds and their links to the present. She brings to life the enslaved women whose bodies were exploited and used as experiments at the hands of Dr. James Marion Sims in his pursuit to successfully repair fistulas and eventually become “the father of modern gynecology.”

The histories of Anarcha, Betsey, Lucy, and at least eight other “unnamed” women were passed down to Maples in the way that most difficult gynecological experiences are: from one woman to another willing to share her “open and unedited version of her experience” (Maples). The public airing and revelation of this topic is still taboo, even in a society where women’s healthcare is hotly debated. Mend’s subject matter is raw, emotional, and relevant in these modern times where Black women have the highest maternal mortality rate in a developed nation and where the overall rate continues to rise. 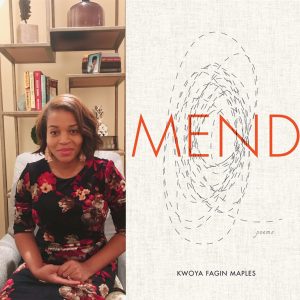 Maples doesn’t confront these issues coyly. Mend’s cover, a messily stitched oval, shouts its subject matter unapologetically even when the book is closed. The first poem, “The Door,” greets its reader with “a naked woman,” whom the speaker compares to a sow. The words on the page are arranged like stitches. And because history is written by the victors, her pain is interrupted, on the next page, by the words of Sims’ autobiography as he excitedly recounts the day he invented the speculum.

Like her characters, Maples’ audience is trapped in this experience. At times, readers are the women ashamed, drugged, and delirious from pain. Sometimes readers are omniscient observers in the room. They are pulled to the present as Maples researches and writes in Mt. Meigs, and they are thrust backward again to the very beginning—before the conception which led to the fistula and subsequent suffering.

Maples beautifully amplifies the suffering of Sim’s patients inthe sonnet corona, “What Yields.” The women speak without interruption as their voices spill out against the silence.  As Sims deprives them of water and pain-killing opium, Maples’ speakers comment on his inhumanity as his unsuccessful attempts to treat them result in more injuries. One woman fantasizes about punching him in the mouth and watching him bleed. In Maples’ collection, these women cease to exist merely as property and test subjects. Instead, their voices convey a  pain that runs deeper than Sim’s rough, uncaring hands. By resurrecting this secret,  Maples’ poetry ties early gynecological practices to the contemporary devaluation of Black women’s bodies and lives.

Maples’ collection ends by bringing readers  to the present  as she explores the mothers in her life and tells of her own traumatic experience giving birth. For everyone else, the babies become the focus as they are whisked away to the NICU, but Maples’ own mother bathes her and reminds her that she is “worth tenderness.” By writing her book, Maples has extended this tenderness to those to whom it was denied.

Mend can be purchased here: bit.ly/MaplesMend