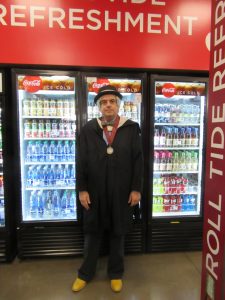 “My job,” says Michael Martone, “is to open up spaces of wonder and delight and surprise for the audience.” This comment comes as Martone is set to retire from UA this spring, after more than four decades teaching creative writing. But the work—the writing and responding to other people’s writing—will continue, he insists. What will go is the constant ping of e-mail and the response to surveys that request just 20 more minutes of his time. But the writing will always be there.

Martone is a prolific writer, publishing consistently for more than 40 years, with nearly 30 books and chapbooks to his name. This act of constant writing goes back to his youth and to his mother, whom he so often saw writing poems, invocations, and pieces for the local paper. For Martone, writing was “just another adult thing that you do. You have dinner, you brush your teeth, you write.”

He recalls, too, his first graduate workshop at Johns Hopkins, in which he felt that out of twelve writers in the class, ten were more accomplished than he was. But now, all these years later, only Martone and one other person from that workshop continue to write. “So,” he grins, “I win.”

And the writing continues apace—2018 brought both Brooding: Arias, Choruses, Lullabies, Follies, Dirges and a Duet and The Moon Over Wapakoneta: Fictions & Science Fictions from Indiana & Beyond—and there is yet another book forthcoming, The Collected Writings of Art Smith, the Bird Boy of Fort Waye, which Martone has edited.

In his work, the wonder and delight and surprise abound. Readers encounter Amish in spaceships, Derek Jeter at a modern art exhibit, genealogies delivered by the remembrance of thermoses, “Jack and the Beanstalk” retold in the Dust Bowl of the Great Depression, and Cary Grant re-animated as a hologram in Indiana. 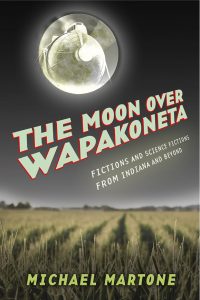 Martone re-tells the story of Hermes and Apollo: Hermes, the baby trickster steals Apollo’s cattle, then by way of atonement offers Apollo the lyre. Although Apollo plays the lyre beautifully, Martone is more interested in Hermes. “What Hermes did with the lyre,” Martone explains, “is to take the category of animal parts—the tortoise shell, the horns of a cow, the cat-gut—and transform it into the category of musical instrument.” This is precisely what Martone does with genre, so instead of narrative realism, we are offered fictive travel guides, or contributor’s notes, or critical reviews of Kodak: The Film.

For Martone, much of this eclectic approach to genre boils down to defamiliarization, a technique that reveals to the reader how strange and weird their world is. He reflects, both in his work and in conversation, back to influence from Kurt Vonnegut. “What Vonnegut taught me,” Martone says, “is to really look at the Midwest, and don’t just say it’s boring because it is very bizarre if you stop and actually defamiliarize it.” For Martone, that defamiliarization holds true of form itself: “We get used to the idea, as Vonnegut says, that there’s a beginning, a middle, and an end. But how weird is that?”

These two drives—toward constant production and defamiliarization—guide Martone’s teaching, too. “The only thing I teach in EN 200,” he says, “is defamiliarization.” To those ends, he takes his students around campus to see it with new eyes, or introduces them to the weird magic of postcards, a phenomenon with which few of them are truly familiar. “I tell them we’re going to take a sheet of paper, write a note on it, then address it,” he says. “Then I have these special sheets of paper with adhesive on the back that I bought from the federal government. We’re going to put that adhesive paper on the note, and then walk around campus looking for a blue box. I say, ‘We can put these pieces of paper inside the blue box, and then several days later a uniformed officer of the federal government will deliver it to your house.’ Defamiliarization! I mean, how strange is that? Bizarre!”

Many graduate students who have taken Martone’s workshops have experienced how he defamiliarizes the workshop itself, through his hypoxic approach to creative writing. After years of teaching the traditional workshop—a few students “up” each week, with concentrated discussions on their stories—Martone realized that much of what those workshops trained students for was criticism of writing, rather than privileging writing itself. The old form also valued product—a single, polished fiction—over the process of writing. Martone’s hypoxic workshop inverts that aim, with every student turning in texts each week for rapid-fire 9-minute discussions. “It is a generative workshop,” Martone explains, “not a workshop of criticism. When students say they can’t do that, I remind them that they worked very hard through the application process because they wanted to be a writer. All I’m saying is, ‘Write!’” 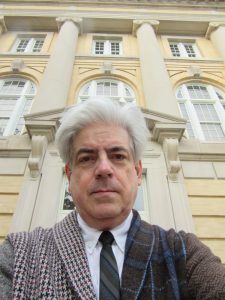 This approach also means that at the end of the semester, students have 14 fictions, rather than the traditional two or three. The old workshop, Martone says, “is tactical, about solving one particular problem, and what I do is strategic. I’m interested in making students writers forever. The old model is just fighting battles. Here I’m winning the war.”

To those ends, Martone has included on his expected outcomes for his syllabus that his students will still be writing in 20 years. “The dean asked me how I’m going to assess this,” Martone says, “and I said that we can give them a call in 20 years.” To show the early results of that goal, for his retirement Martone will hold a “Final Final” on June 5-6, 2020. All of his former students are invited to return to Alabama to read. “We’ll have a party on the night of June 5,” he explains, “and then all day June 6, I’m going to sit beneath the dinosaur in Smith Hall, and have students from my 24 years of teaching come read.” A fitting send-off for Martone: even as the work ends, the job of creation continues.