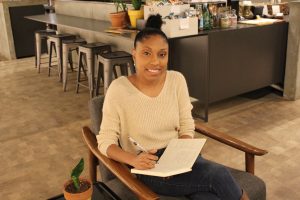 Alexus M. Cumbie is a senior at the University of Alabama studying Political Science and Business Management with a specialization in Human Resources. On campus, she serves as President of the NAACP, Education Advancement Chair to the Theta Sigma Chapter of Alpha Kappa Alpha Sorority, Inc., and the Vice President of the Anderson Society. Cumbie is a member of the Mortar Board, Elliot Society, and the XXXI honor societies. Her poetry has appeared in the American Library of Poetry. She also founded the organization, Literary Vibes Birmingham, which is dedicated to increasing literacy rates through poetry, spoken word, and music in low socioeconomic communities. Her work highlights the importance of self-expression, political commentary, and the humanity that stems from crowded rooms and a potpourri of narratives. In 2019, Cumbie was named one of Birmingham’s most promising natives to invest in by The Birmingham Times, and honored as the Southeastern Region’s New Soror of the Year by Alpha Kappa Alpha Sorority, Inc.

You won the Greer Marechal Memorial Prize in Creative Non-Fiction for your essay, “Why Negro Bodies Dodge a Southern Sun.” Tell us about the essay, your process in writing and submitting it, and how you felt when you won the contest!

I originally began writing this paper for an Honors College course called, “Doctors Who Write.” I chose to discuss five examples of medical malpractice, including the Tuskegee Syphilis Experiments.The core idea of the paper came while I was on a volunteer service trip to Tuskegee, Alabama to promote literacy programming for retired veterans. Driving down the roads of Tuskegee, the heaviness of the air reminded me of both the trauma that was inflicted on the community, as well as the triumphs of Tuskegee in restoring their faith in humanity. I knew I wanted to discuss the Tuskegee Syphilis Experiments, so I returned home to research other instances alike. While I am excited to be acknowledged for my work among a field of great student writers, I cannot claim this prize without acknowledging the people that inspired the paper. The purpose was to highlight communities of color and acknowledge their contributions to our world. Readers should feel both a sense of appreciation and apology for their sacrifices.

Your essay was inspired by your grandfather’s distrust in the medical field and was arranged into five distinct examples. How did you decide on this structure?

I was intentional about only choosing five distinct examples of medical malpractice. The purpose was to encourage readers to inquire about other injustices inflicted on communities of color. I wanted readers to say, “I had no idea that happened. I wonder what else was endured?” As for taking a more creative approach to tell these stories, I think sometimes there’s a  disconnect between the language normalized in academia and the language of the public. I wrote this paper  in layman’s terms for the average reader because I did not want to sacrifice any moment of understanding. The communities in the paper deserved to be fully seen, heard, and recognized. I’d like to believe that introducing the story with a salute to the southern dialect challenged the formality of a typical research paper and established an intimate connection with the reader. It draws readers in while serving as a sobering reminder of the cumulative emotional and physical trauma echoing into present day behaviors. If the paper had been too tangled in scientific jargon, readers would have missed the point: communities of colors were experimented on, and those ramifications contribute to a modern-day distrust of people working in the biomedical fields.

“Why Negro Bodies Dodge a Southern Sun” is distinctly “Southern.” How vital is place in this essay? Does place play a role in the rest of your writing?

The entire essay starts under the Southern sun of Montevallo, Alabama and travels throughout the country highlighting distinct examples of medical malpractice, only to land back under the Southern sun at the end of the story. All readers have something in common: we have all felt the heat of a summer sun, and then begged her to go easy on us. The southern sun’s heat establishes the idea that we all have experienced moments of pain that we wanted to be rescued from. The juxtaposition of the sun and Negro body in the title also hints at slavery, which sets the stage for the experiments I discuss. We have to honor communities by advocating for those who are still marginalized. The introduction begins with a story-like feel that we can relate to: a child roughing up their body during playtime then seeking comfort, our grandparents rambling on about how things used to be, and generations misunderstanding each other’s points of view.  All readers can fit somewhere in this story, and it was important to establish an empathic connection because these experiences demand attention. “Why Negro Bodies Dodge a Southern Sun” mandates that we take care of each other. I encourage readers to acknowledge the trauma that exists in their beloved communities, and to seize the opportunity to understand their corners of the world.

Are you currently working on any creative writing projects?

I am currently working on a book of poetry contrasting my childhood to my life as a growing adult. I would say more, but that would spoil the surprise! This book will be full of wonderful, humorous conclusions that children conjure up for the sake of understanding the world, but it also emphasizes the necessity of laughing at our own misfortunes as we figure out life.

What future goals do you have for your writing and career?

In terms of writing, my personal goal has always been to increase literacy rates. Language is a powerful tool and provides a sanctuary to express one’s triumphs, traumas, and everything in between. My organization, Literary Vibes Birmingham, provides communities with a space, a stage, and a sanctuary for a potpourri of narratives from Southern artists. I have a special love for the South because I was raised to see the talent that exists here. My professional goals are to amplify the voices of communities that have been silenced and misunderstood. I am willing to use any genre that accomplishes that mission. Literary Vibes can be found on Instagram @literaryvibesbham and on Facebook: https://m.facebook.com/literaryvibes/

What writer has been your biggest inspiration?

Zora Neale Hurston has always been my favorite writer. I think one of the great misfortunes of the world was not honoring her work loudly when she was alive, so I have taken the responsibility to share her work with others. It was not until I read her work that I understood the true power of language and how the ability to express oneself sets the stage for inner self-healing.

What is your approach to writing non-fiction? Do you have any advice to those who are new to writing the genre?

The best way to approach non-fiction is to honor the communities that have contributed to your own personal narratives. That is why I seized the opportunity to honor my grandfather and the lessons he taught me as a child. The little moments in life can inspire the beauty that is non-fiction and historical literature. I am sure that my grandfather never imagined the ramifications of healing my knee with his old rag. It was not until a decade had passed that the moment manifested itself into this body of work. My advice to those new to writing non-fiction is that you yourself are already a body of work. Use your experiences to inspire your work. Commit yourself to a sense of reconciliation and healing in the process. As a poet, I encourage you to use this opportunity to be vulnerable with your readers and create spaces for them to do the same.