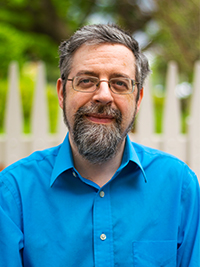 Dr. David Ainsworth is an associate professor of seventeenth century British literature as part of the Hudson Strode Program in Renaissance studies here in UA’s Department of English. He earned his Ph.D. from the University of Wisconsin-Madison. This past year, Professor Ainsworth served as interim chair of the Department of English. Prior to his departmental leadership, Ainsworth served as the first communications director of the Milton Society of America from 2013-2017. His latest book, Milton, Music, and Literary Interpretation: Reading through the Spirit was published this year by Routledge Press.

When did you first encounter Milton and what continues to draw you to his work?

I first encountered Milton as an undergraduate, as part of a humanities course on the European Renaissance. We only read part of Paradise Lost. I’m still a little annoyed that my professor didn’t respond to my disappointment that we hadn’t gotten to the war in Heaven. I wish that my professor had noted that Milton did, in fact, discuss the war in a part of the poem we had not read for class.

I’m drawn to Milton’s work because he is trying to imaginatively make sense both of theology and of the entire apparatus of Christian faith (with a sprinkling of Hebraic faith mixed in), while also writing great poetry. Faced with the possibility, even the likelihood, that there are no answers available to a human being, he insists on continuing the attempt because he believes that, in the end, working one’s faith out for oneself is what God wants of all believers.

What would you like your students to understand about Milton’s work?

I suppose, in the end, I want my students to take away Milton’s challenge to them to think critically about everything. “Critical thinking” is something of an academic buzzword, but for Milton, it is the purpose for human life, and he pursues this rigorous examination throughout his work. Whether he challenges students’ ability to interpret, or their faith, or their worldview, or their understanding of the discipline of English, I want them to engage with his thinking and walk away changed because of it. How they change is up to them.

Your new book examines Milton’s work with music to inform his understanding of the sacred and inexpressible. It strikes me that the arts in general help us to relate to the sublime and the sacred. Would you agree?

I do agree, and that’s particularly true if we want to live in a humanist world. Academia isn’t always as good as it should be at affording academics the scope to express what lies beyond the scope of language. A Milton scholar shouldn’t be expected to outdo Milton’s poetic achievement, but the more scholarship can partake of the artistry that informs it, the more ways Milton’s work addresses that which cannot be readily categorized or defined. Many humanities scholars who are trained to work across artistic disciplines may have some advantage over those who work in more categorized fields. At the same time, academia hasn’t

always done as much as it should to create art alongside analysis. 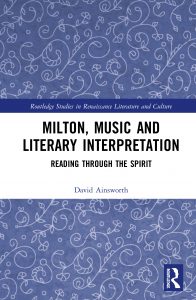 Milton’s interest in music informs his work. As a scholar with a background in math, does your mathematical training influence the way you think about your own work?

Absolutely. To some extent, it’s an epistemological influence, in the sense that my mathematical training reinforces my broader sense of the possibility that the underlying fabric of the world, either as it is or as we constitute it through our own consciousness and lived experience, relies upon a system of signs. Those signs may not be arbitrary. They may actually hint at structures which either emerge from us as human beings, or from some inherent property of reality. That anyone can believe words don’t matter while numbers do points to the mystification of mathematics as a discipline. Most mathematicians I encountered either had great difficulty translating from math into any other language, or they were polymaths and embraced language and art as well as math and music. I think the somewhat artificial disjuncture between mathematics and the humanities hasn’t done either discipline any favors.

Finally, what’s next for you?

My next book project will be titled Milton’s Queer Spirit. I will be arguing that Milton’s understanding of Christian communion through the Holy Spirit would have benefited from queer theory. In essence, the union between believers and the divine, for Milton, can be best represented as both heterosexual and queer. His understanding of the soul as material and the ways in which he describes the union of souls extends from the connections the metaphysical poets made between ecstatic sexual union and the merging of souls. From this connection, Milton ends up with creation’s desire for union with God. That desire’s expression relies upon queer concepts Milton simply didn’t have access to. He’s trying to fill in the gaps, but he simply doesn’t have all of the concepts that he needs.