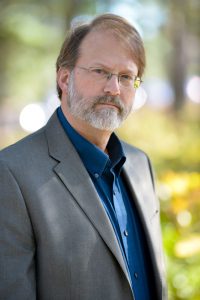 For members of the UA Department of English, Dr. Steven Trout is well-known for his role chairing the Department through the challenges of an ongoing pandemic. However, his work on war and remembrance—specifically in terms of Modernist literature, and in broader cultural studies—is extensive and impressive. His most recent works, both published in 2020, are The Vietnam Veterans Memorial at Angel Fire: War, Remembrance, and an American Tragedy, and Portraits of Remembrance: Painting, Memory, and the First World War, a collection of essays co-edited with Margaret Hutchison (Australian Catholic University).

Angel Fire, which received a Southwest Book Award, was a passion project of Trout’s more than eight years in the making. He arrived at the project by happy accident while vacationing with his wife in New Mexico. While driving the Enchanted Circle in the Sangre de Cristo mountains, Trout looked down to see the Angel Fire Memorial, a nondenominational chapel of avant-garde design. “It looked so otherworldly,” he recalls, “as if left behind by extraterrestrials.”

Feeling compelled to visit, Trout felt only more compelled to explore the memorial as a book topic once he had seen the chapel up close. He explains that “the Visitor’s Center movingly sketched out the story of David Westphall, a marine lieutenant who was killed in Vietnam in 1968 and whose death inspired his parents and his surviving brother to construct the memorial.” But he was also enthralled by how the site “embeds that personal story within a larger narrative of public remembrance.” Therein lies its power, he explains: “Built more than a decade before the official National Vietnam Veterans Memorial in Washington DC,  the memorial at Angel Fire honors all 58,000 Americans who died in the Vietnam War, but it’s also a place that reminds you at every corner of the Westphall family’s private anguish. This reminder of loss gives the site a disconcertingly intimate feel that is at the same time expansive. It’s like no other memorial I have visited.” 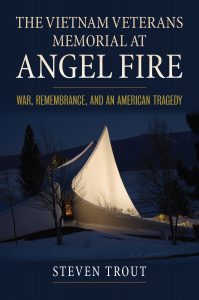 That friction between the personal and the public at Angel Fire ties in with the friction between what Trout refers to—drawing upon the work of historian John Bodnar—as the “vernacular” and the “official” in terms of remembrance. “Memorials are intensely negotiated, and always political in nature,” he explains. “They often reflect a tension between people who are empowered by military rank or political status, and thus feel that they can control the commemorative narrative, and people who were actually involved in a war at the ground level and who have a deep-seated desire to assert their own version of it.” As a result of this tension, all memorials undergo a “complex process of negotiation and accommodation, a process fraught with conflict.”

Yet, in speaking with Trout, it becomes clear that the personal story at Angel Fire remains the most fascinating to him. He describes the Westphall family’s effort—in want of funding and in the long shadow of grief—to memorialize their son and the others lost in Vietnam as both “heroic” and “noble.” “Yet at the same time,” he says, “this memorial enterprise destroyed that family. It pushed David Westphall’s mother into serious mental illness and led to her estrangement from her husband, who became absolutely obsessed with the memorial. It also created difficulties for the surviving brother, Walter Westphall, whose life really didn’t come together until he was middle-aged and could, at least to some extent, put this admirable but toxic legacy behind him.” 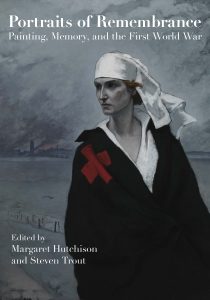 Trout describes himself as a “literary critic who’s morphed into a cultural studies scholar who enjoys writing narrative.” In fact, he began his academic career with a focus on Modern British literature and nearly wrote a dissertation on Joseph Conrad, but his attention was drawn inexorably back to war, specifically World War I, and how memories of war shape and are shaped by cultures. Trout’s interest reaches all the way back to childhood when his father—a 9th grade Social Studies teacher—would share with him his lessons on WWI.  He remembers being drawn to this period of history, particularly how “bizarre and fascinating” it seemed when his father described the Western Front as a “system of trenches that stretched for over 400 miles from the North Sea all the way to the Swiss border, where armies remained relatively static for four years.”

In that recollection, one can hear the hallmarks of Trout’s work: an eye for the inherent absurdity of war, and a sense of how war lives on in memory.  These ideas come to life in Trout’s other book from 2020, Portraits of Remembrance, as well as in Trout’s own essay contribution to that volume, “A ‘rush frénétique’: Representation, Memory, and George Scott’s La Brigade Marine Américaine au Bois de Belleau.” In much of the collection, the tension between the “official” and “vernacular” remains a focus. In many of the case studies, we see painting deployed as a form of “official” memorialization, but time and again a “vernacular” remembrance—at odds with the original governmental aims—emerges. Yet the power of the book also rests in its scope. The collection takes a truly international approach, examining how visual art played and plays a role in remembering WWI in America, Russia, France, Britain, Turkey, Belgium, Germany, Canada, New Zealand, and other countries.  One of the chapters, a study of Austrian painters who served on the conflict’s lesser-known Eastern Front, is by UA Professor of English Emeritus, Philip Beidler.

Trout’s work continues, with two projects currently underway. The first is an afterword for a collection of essays comparing the American Civil War and WWI. “The essays,” Trout explains, “examine how veterans were treated after each conflict, how mental health was understood, or how environmental factors affected warfare in the 1860s versus the 1910s.” Trout’s afterword will “compare the conflicts’ literary legacies by setting Ulysses S. Grant’s celebrated memoirs alongside John J. Pershing’s account of his experiences during WWI and by discussing the connections (as well as the stark contrasts) between Stephen Crane’s The Red Badge of Courage and Thomas Boyd’s 1923 war novel Through the Wheat.”

Additionally, Trout is co-editing a memoir by a WWI American officer who served in France and was taken prisoner by the Germans shortly before the Armistice. He is excited about the work not only because the memoir is “extremely well-written, vivid, and very detailed,” but also because it gives a glimpse behind German lines near the end of the war, showing “open rebellion” on the part of German soldiers in scenes that belie the “Nazi myth that the German army was never defeated in the field in WWI.”

In all of his projects, Trout brings a critical eye, sharpened by decades of scholarly practice, along with a great deal of enthusiasm. This enthusiasm is evident, too, when he talks about his role as chair and his life at the university, and he looks forward—as does everyone—to a time when those roles can be fulfilled in a more social and vibrant manner.