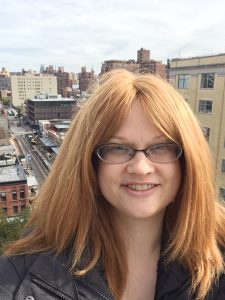 Amber Buck is an assistant professor of composition and rhetoric in the University of Alabama’s Department of English. She received her Ph.D. in English and Writing Studies from the University of Illinois, Urbana-Champaign. Dr. Buck specializes in digital literacies, multimodal composition, and social media. She recently co-edited a collection of essays on the multiple facets of Netflix, Netflix at the Nexus: Content, Practice, and Production in the Age of Streaming Television (Peter Lang, 2019).

Can you explain the background of your recent edited collection, Netflix at the Nexus?

Netflix at the Nexus came about from a project my partner, Theo Plothe, and I did at the Society of Cinema and Media Studies Conference in 2017. We looked at tweets that used the House of Cards hashtag during the fourth season launch. A lot of television studies research considers Twitter a second screen for live TV conversations. Much of the research had focused on live sporting events, award shows, and so on. However, what makes Netflix interesting is that no one is watching at the same time. We were really interested in how people were discussing the show given that there is a pretty strong spoiler etiquette around discussing TV shows on social media.

We collected tweets using the hashtag #houseofcards over the course of the first week of the show’s release. We coded them for spoiler content and found that the conversation tended towards more habitual action, stuff that wouldn’t be recognizable as, “this is what happened.” People tweeted things that could apply to different moments. After we presented that research, we got a lot of good feedback from the conference. We discussed how Netflix was changing television as an entertainment form and audience’s viewing practices. Overall, we thought that Netflix would be an interesting focal point for conversation in internet studies around different online platforms. We put out a call for chapters and recruited through our networks and through the Association of Internet Researchers listserv, which is an international body. That is why our collection is so diverse in terms of where contributors are located.

Can you explain the organization of the book and what each section aims to explore about Netflix?

We organized the book into sections dealing with the different dimensions of Netflix. There’s a section about the platform issues like their algorithm suggestions and how Netflix’s interface is designed to encourage binge watching. The second section is focused on the content, particularly Netflix’s original programming. The third section is focused on user practices like second screens.

There have been a couple other edited collections on Netflix, but we were especially interested in its global reach. At the time, Netflix was being released in different countries. What’s interesting about that reach is demonstrated by the essay focused on Italian-language releases in our collection. When Netflix was released in Italy, many people were frustrated and disappointed because they expected that Netflix was going to have all American TV content. Many Italians were like, “Why don’t I have Game of Thrones on Netflix?” Anyone in the U.S. knows that Game of Thrones is an HBO product and that Netflix doesn’t have a contract with HBO. However, if you’re in a different country and Netflix is the “American” TV platform, you’re going to wonder why you can’t get all U. S. television on Netflix.

This example points to how Netflix is both a local and a global platform. They only have certain content in certain places. They develop some content specifically for Latin American markets, and so on. Netflix also raises interesting questions with the content of their programs, especially when it moved from an archive of other networks’ content to more of their own original programming. If you assume that people will binge the show, you can organize and write the show in specific ways. The series doesn’t have to fit a certain time length for network constraints. If people aren’t watching one episode per week, but rather, all at once, what else can you do with that medium? The collection also looks at user practices—how users integrate Netflix into their daily media practices and how they use second screen applications while they watch Netflix shows. 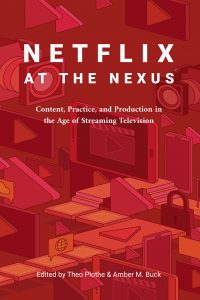 Liminality is central to the volume, from its title to what you have already noted about second screen and other user practices. Can you elaborate on that concept and what it helps us understand about Netflix?

What we were really interested in was the idea of Netflix as both breaking down and reifying boundaries. The platform both uses and changes old structures that have divided mediums, like film and television, and genres, like comedy and drama. Netflix raises the question, “When do these categories become no longer useful?” One of the primary concepts of new media is remediation. When new technologies are first introduced, they replicate old technologies and then they transform into something different. First, Netflix was a service where you could rent movies in the mail as DVDs. Then, you could stream those movies online. It was like Blockbuster, but through the mail and the internet, and then, just the internet. Now it’s developing both film and television content. It’s interesting to consider at what point those distinctions become less productive.

What does the case of Netflix tell us about general transformations in entertainment media right now, even in the rapid changes in the year since the collection came out?

Netflix is in a different place than it was when we started the collection. One interesting shift, recently on Netflix, is a turn to reality shows. Likewise, they recently started a feature that ranks popular shows. Netflix typically hadn’t given out any information about ratings—they don’t have to go through Nielsen to rank shows. But I noticed that they have started listing the top-ten currently trending shows. But I also wonder—and this is pure speculation—if they’re moving away from the “we’re going to drop all thirteen episodes of this show at once” model—which brought up interesting questions about considering these artifacts separate episodes or as a collective—to more of a week-by-week model. For instance, we see this phenomenon in Patriot Act, which dropped week to week.

Netflix is also facing more competition. First the question was, “Are people going to be streaming or watching regular television?” Now that streaming is more universal, Netflix is losing many of its streaming deals because every company wants its own streaming service. It’s now a question of which services will survive. Who wants to pay for six different streaming services? Soon some company is going to claim, “We’re innovating! You can bundle all these streams together! Oh, look we reinvented cable!” The environment has changed a lot since we started the project. When we started, Netflix had a little of the “peak tv” elements—the high-quality shows led by top actors. Now, it’s something totally different.

What new content on streaming services seems to be pushing or extending some of the trends you see this collection unpacking? What could we watch that pushes different boundaries whether it’s genre or across media?

I’m interested in Netflix as a trans-national television platform, about what kinds of international content becomes available on the US version of Netflix. One of the contributors to the collection wrote about the streaming platform, Viki, which contains a lot of East Asian content. That one is interesting because it integrates interactive features. Most other platforms are a one-to-many content model; if you want to interact with other viewers you need to go to a different platform—Twitter, for instance.

In terms of anime, my coauthor and I are interested in what content makes it to Netflix. For a while Hulu was carrying a lot of anime and, quite quickly, releasing subtitled versions but not so much anymore. I am interested in what international content makes its way into US-based streaming services, which raises questions about what counts as “original content” for a platform. For instance, I’ve been watching Derry Girls, a UK production that aired in the UK first but has been marketed as a Netflix “original.” I’m also interested in content created by algorithm, which Netflix has done more than other platforms. That Sandra Bullock film, Bird Box, felt like content created by algorithm. I had the impression that Netflix thought, “People like Sandra Bullock in action-suspense-thrillers, so let’s make a film that is like A Quiet Place but different.”

It’s also interesting how shows have had a resurgence because of their availability on Netflix.  The West Wing specifically enjoyed a resurgence when it came onto streaming, to the extent that there was a podcast with one of the actors, Joshua Malina, because people were re-watching it. Another podcast revolves around The Office, with two people from the show—Jenna Fischer and Amanda Kinsey. There was the Gilmore Guys podcast about The Gilmore Girls. The afterlives of those kinds of shows on streaming is completely dependent on what’s available on the platform.