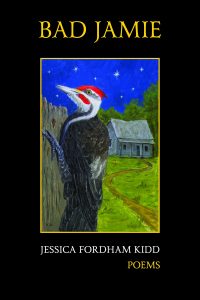 Professor Jessica Fordham Kidd’s debut book, Bad Jamie, is a magical realist poetry collection that tells the story of the tragic everyman of its title character, who embodies family tension and connection to nature.

Jamie has complicated relationships with every character in the collection. Despite strong family ties, there are social and economic blocks that keep Jamie from fulfilling his role as a “good” dad, brother, and son. His addictions keep him from fully expressing his longing to be present in the lives of his children. Jamie has two sons from previous relationships and a daughter with his ex-wife. He doesn’t even know about the youngest son until the “strong pull of blood” brings the nameless boy together with his siblings to save their father in the end. As with his children, Jamie’s bond with his brother has been worn thin by the stresses of the former’s shortcomings. Yet his relationships with women are what give Kidd’s poetry its poignancy. The most visceral bonds that Bad Jamie has are with the exceptional women in his life.

While Kidd’s verses depict Jamie’s ties to male characters realistically, her female characters change species, a nod to Kidd’s interest in magical realism and the characters’ attachment to the natural world. After their deaths, his mother and grandmother have morphed into woodpeckers who keep watch over the family. Jamie’s ex-wife, Cindy, and their daughter, Girl Jamie, shape-shift between their human forms and beautiful, deadly mountain lions, even as both women understand the dangers of being seen in their animal forms. Kidd best sums up the role of the metamorphosis of these women: “These animal shapes allow the women of the collection to express the multiplicities of their desires and roles while being representatives of the family’s close ties with their southern, Appalachian environment. With Bad Jamie such a hapless, chaotic force, the women have to be wild, protective, and wise to cope with him.” Bad Jamie is a “bad” father and husband by his own and others’ estimation, and Kidd’s poetry explores how her protagonist shapes the lives of those he loves in mundane and magical ways. 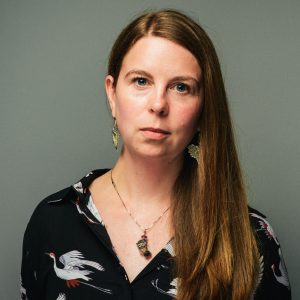 Bad Jamie is representative of stumbling blocks we all face in our often inexplicable desire for family. In the universe of Kidd’s characters, and for Bad Jamie especially, the promise of family is also the promise of a magical bond to his children, mother, brother, and ex-wife, even in moments of dysfunction. And while there is no indication of a Hollywood happy ending, the reader is left with a sense of hope and renewal as the final poem closes with a cleansing by fire, a baptism, and shoots of new growth emerging from the rich, dark soil of the Appalachian Mountains.