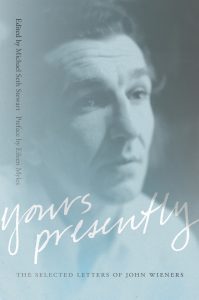 Many English faculty will already know Seth Stewart, a six-year veteran of the department. His approachable personality and continual faculty support—holding frequent teaching workshops and guidance sessions for his fellow teachers—make him a prominent and invaluable colleague. But along with his passionate commitment to teaching and faculty service, he is also an accomplished scholar with a substantial contribution to pioneering scholarly work on the lesser known but influential poet, John Wieners.

Stewart’s newest book, Yours Presently: the Selected Letters of John Wieners is the first comprehensive and edited collection of Wieners’s letters. The project is nine years in the making, building onto Stewart’s doctoral research and dissertation on mid-century American poetry, particularly Queer poets of the post-WWII era. Stewart points out that Wieners was integral to the Black Mountain College poetic movement, Black Mountain College, the San Francisco Renaissance, New York’s East Village, and the Beat Generation. Also, as Stewart’s new book highlights, Wieners made an unassailable mark on mid-twentieth century American poetry. He even published Jack Kerouac’s first collection of poetry, and Allen Ginsberg referred to him as the “pure poet.”

Yet, despite Wieners’ prolific contributions to American letters, Stewart explains that “historians of the New American Poetry and its component schools often ignore Wieners’s contribution or consign him to the periphery.” Stewart likens this disregard to the early days of rock band The Velvet Underground: “You know that famous thing people say about their first album?” Stewart says. “Hardly anybody bought it, but everyone who did started a band. John Wieners is like that. You may not know him, but you’ve definitely read a lot of the poets who were heavily inspired by John Wieners.”  How, though, could such a revered poet, praised by his contemporaries, have been so pushed to the margins? In Stewart’s view, literary historians deem him “practically illegible […] consigning him to a footnote.” He “falls through the cracks,” Stewart says, because he “had a foot in so many of these movements” that literary history often views him as an important sociological figure and not so much as a core contributor to the literary content coming out of these movements.

This omission is starting to change, though, and Stewart’s work is breaking new ground and bringing Wieners’ import to light. Stewart’s newest book came to fruition for two reasons: first, because he fell in love with Wieners’s poetry upon first encountering it and, second, because he wanted to get to know him better. “I never really feel like I’ve gotten to know a writer until I’ve read their letters,” Stewart avers. “Some of his journals were available, but none of his letters were.” Stewart thus saw a desperate need, not just for literary studies but for a more complete historical narrative of the various poetic movements of which Wieners was a part.

So Stewart started from scratch and hit the archives. His first year of research was an “intensive basic-training experience.” He quickly learned that many writers’ papers, journals, and letters are rarely found in one central location, nor are they necessarily filed in ways that make them easy to locate. Every few years, writers like Wieners would sell their papers to whoever would buy them, library or otherwise, scattering these documents far and wide. While Stewart found archives all over the country with Wieners’s papers, locating his letters was a different story. “Only the more self-involved writers save carbon copies of their letters,” Stewart notes. “So, as a researcher, you have to think, ‘to whom could he have written?’ Then you start searching their archives and reading all these finding aides.” Locating and contacting these various correspondences was, of course, part of the process, too. And along this journey of discovery, Stewart developed wonderful friendships, such as those of poetic greats Diane Di Prima and Anne Waldman.

Altogether, Stewart consulted close to fifty libraries. “If you’re a literary person but always kind of fantasized about being a detective,” he says, archival research is a perfect way to enact that fantasy: “It’s like putting a puzzle together.” For this reason, Stewart often has his students conduct exercises in archival research as well. It’s not only enjoyable for students, he says, but it’s also important that they learn how thorough research requires getting their hands dirty rather than relying on the all-knowing powers of search engines.

Such devoted sleuthing turned up many discoveries for Stewart. He notes, “Wieners makes constant references in all of his letters to people, places, and events that I just couldn’t find stories about. There are so many stories and pockets—especially of the Underground—

that have just vanished. So, I got obsessed with giving footnotes to as many of those moments as I could find, and I discovered all of these fascinating people and places that have disappeared from the histories.”

While time-consuming and sometimes laborious, Stewart’s work not only deepens our understanding of Wieners, but it has uncovered numerous microhistories and thus broadened our knowledge of mid-century poetics. Stewart opted for a “non-critical” edition of his book, whereby he makes no final decisions in “cleaning up the text,” such as one would for a final edition. Stewart also avoided a facsimile edition, which would have included photocopies of the letters in their original form. Stewart wanted an edition that threaded the needle between a critical edition at one extreme and a facsimile edition on the other. He wanted readers to see the composition process in all its “messiness,” with crossed out words and rearrangements. “For these letters,” Stewart says, “I find the changes are what makes them so compelling.” These changes highlight Wieners’s thought process and acquaint readers with his endearing sense of humor. Stewart transcribes all the changes Wieners made when writing, and, as a result, one certainly does feel a close connection to the poet. Stewart’s book makes available the life and mind of a long-overlooked writer whose work can now be explored in ways that have previously been impossible.