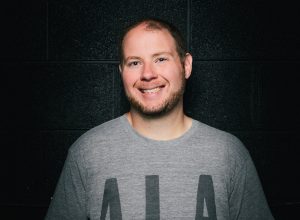 Originally from New Jersey, Brian Oliu received his MFA from UA. He has gone on to author three chapbooks, several works of nonfiction, and is currently Assistant Director of the First-Year Writing Program. Van Newell recently interviewed him about his latest work of nonfiction Body Drop: Notes on Fandom and Pain in Professional Wrestling.

I think we all appreciate the concept of “the chase”—where an often passed-over hero finds himself on a quest to the top, as elements of the hero’s past continue to pop up trying to help them or harm them. One of the big hooks in wrestling is often a David vs. Goliath situation. Many diminutive wrestlers find themselves in matches with literal giants and often an underappreciated fan-favorite takes on a corporate-sponsored wrestler. Some of the most compelling runs in World Wrestling Entertainment follow this script: from Daniel Bryan’s Wrestlemania 30 run, to Kofi Kingston’s unlikely ascension to the top, which flipped the Daniel Bryan narrative on its head.

I think the biggest thing that happened while writing this book was the birth of All Elite Wrestling—essentially a mainstream alternative to WWE, which has been more or less running unopposed for about two decades. The most fascinating element of wrestling to me is the fact that it is a television show, and so it still follows very straight-forward tropes of scripted programming a lot of the time. It’s interesting to see how both federations deal with the power and the limitations of producing (multiple!) weekly episodic television programs. I would have liked to dive into some of these new wrinkles that a new promotion has brought to the wrestling landscape.

Sports fans most often root for their hometown teams. Is fanship different for fans of wrestling? Do they root for the most entertaining wrestler, the one they most identify with, or something else?

I find a lot of joy in rooting for wrestlers that I’ve seen “come up”— folks that I’ve been following since they were performing on the independent scene and not on television.

It’s always exciting to see an underrated performer who is on the mid-card take the leap to a main event status. There’s something to seeing a wrestler like Adam Cole perform live in a tiny gymnasium to performing in front of thousands at Arthur Ashe Stadium. And sometimes old favorites make the leap too—they find a gimmick or a storyline that really elevates their character, and so you can’t help but root for them, even if you didn’t think much of them before.

Wrestling, like everything else, has a history of white supremacy—the list of minority and specifically Black champions is extremely short. So, there’s always an interest in rooting for the underdog. Kofi Kingston’s championship run had winks and nods to a wrestler being held back because of his race, which made a lot of people even more invested.

I was a fat kid growing up, so I rooted hard for the other fat wrestlers: Yokozuna will always be an all-time favorite of mine. 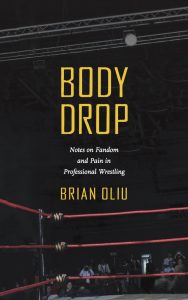 The internet and social media have changed professional wrestling. What do you believe are the positives and negative aspects of online wrestling fandom?

Wrestling promotions love seizing on internet trends to garner mainstream attention. Wrestling is highly artificial on purpose, so when something starts gaining traction online, promoters are quick to adopt it. For example, women’s wrestling was given so little screen time that #GiveDivasAChance started trending. That hashtag spurred even more women’s matches and storylines, and now women wrestlers are given main event status rather than being treated as eye candy.

Like any sub-culture, there is a lot of toxicity in wrestling: horrible bullying, specifically harassment of women wrestlers is a major issue that has been brought to light with the deaths of Daffney and Hana Kimura in recent months. The #SpeakingOut movement allowed people associated with wrestling to discuss emotional, physical, and sexual abuse by those in the wrestling community, and it has made some of those spaces safer.

How does wrestling’s pageantry come into play?

I was just talking the other day with a friend about Project Runway and how they did an episode where their challenge was to dress women wrestlers and it was an absolute blast. The aesthetics and fashions of wrestling is one of my favorite parts of the pageantry—from good guys (or at least wrestlers who perceive themselves as “good guys”) wearing white, to wrestlers wearing light colors when they know they’re going to be cut open—all the way to the elaborate robes and “walk out” outfits vs what wrestlers wear in the ring.

You discussed, in one of your essays, a wrestler that was your hero who assaulted his spouse and “how easy it is to forgive our heroes.” Do you think people “forgive” their heroes because they have attached their own ego to their heroes’ personas? Or that perhaps people can’t make sense of a world where someone they admire does something very wrong?

Yes—I think about these things a lot. I think our culture of celebrity has warped our ideas of justice, forgiveness and penance. We want to give those whom we like the benefit of the doubt simply because of their skills or talent in a particular field (e.g. musicians, artists, writers, athletes, etc), because we regard them as doing good work.

I am absolutely guilty of this too. I do not want to believe that the horrible things that our heroes do are true. I want to believe that there is some misunderstanding. We see this in ourselves and our friends, too. We let someone’s harm slide because we regard that person as “good people,” or because they have never done anything to us specifically.

I think with any fictional character or real actor, we feel as if we’ve invested a lot in these wrestlers, and so when they let us down, we want to be quick to forgive. We do not want to sit with that harm or put new energy into those performers, artists, and people who are doing incredible work and also putting good into the world.