Strode Guest Lecture: Dr. Kristina Bross: The 'Vertues of Chocolate'; or, A Transatlantic Tale of Gender, Commodities, and Cosmopolitanism” 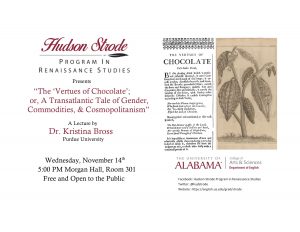 “The ‘Vertues of Chocolate’; or, A Transatlantic Tale of Gender, Commodities, & Cosmopolitanism”

In the seventeenth-century, English promoters of chocolate described it as a product of global trade generally. Chocolate was included as part of a new class of luxury and medicinal products, such as coffee, tea, tobacco and sassafras, which were imported to England from the Indies (both East and West) and consumed by elites and middling sorts alike. This talk closely reads ephemera (a broadside, travel narratives, bawdy verses) that describe chocolate to its new English consumers. Taken together, these works suggest how chocolate as a global commodity was translated into particularly English—and gendered—modes of consumption.