Albert Pionke joined the faculty in 2005 as an assistant professor. He was awarded tenure and the rank of associate professor in 2009, and was promoted to professor in 2014. In fall 2016, he began a three-year appointment as a College of Arts and Sciences Leadership Board Faculty Fellow. He recently edited a book about Scottish philosopher and writer Thomas Carlyle entitled Thomas Carlyle and the Idea of Influence.

Although Carlyle wrote about many topics, from the French Revolution to opera, he never wrote explicitly on the subject of influence.  His great-man theory of history implies a unidirectional model in which great figures from the past provide the impetus for the present, but he never discusses their impact on later generations.  Modern theories of influence are more diverse, with plenty of folks still adhering to the unidirectional model of a single past source for many present results; others see many past sources for a single present result; still others admit the possibility that present conditions modify irrevocably our perception of the past, and a fourth group concentrates not on the agents of influence directly but instead, on the networks that hold them together (whether unidirectional, multi-directional, chronological, achronological, or some combination).  All of these perspectives are represented in the book, which makes for an exciting theoretical conversation.

What are the best practices for teaching Carlyle to students?

Carlyle is a difficult writer both stylistically and ideologically.  My own experience suggests that focusing on his famously and purposefully ungainly style (which borrows syntax and patterns of capitalization from German, as well as rhetorical pyrotechnics from Juvenalian and Menippean satire, metaphors and diction from the King James Bible, and a fondness for punctuation and sentence length that can rival the Euphuists) can yield great results.  Creative writers respond particularly productively to the verbal contortions Carlyle performs.

After reading and editing these eighteen essays, has your perspective on Carlyle changed?

There is nothing like reading works written by smart people to remind one of how much more I have left to learn.  Editing eighteen such pieces with a chronological range from the 15th through the 21st century and a national reach from the present-day Czech Republic to England, the United States, and Japan has made this fact even more apparent than usual.  Carlyle read widely, has been read even more widely, and can be talked about in such a myriad of ways that he seems even more interesting to me than he did before I began to work on the volume.  I have experienced influence, in all of the ways outlined above. 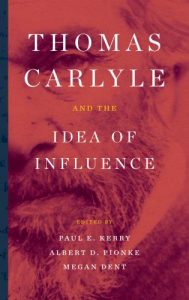 What “fertile ground” do you see future Carlyle scholars focusing on in his writings and philosophy?

Carlyle’s correspondence (43 printed volumes and counting) has been digitized and is available in a fully searchable format online, which means that he is a great candidate for social network analysis.  Locating him within the complex epistolary network of which he was a part, and then subjecting that network to the kinds of computational analyses available to network theory could tell us a great deal about how ideas circulated in the nineteenth century.  Carlyle was a key figure in this circulation thanks to his fluency in German, and network analysis could render his role in the global transmission of ideas visually perceptible.  Since he and his wife, Jane Welsh Carlyle, communicated with so many people over the course of their long lives, an analysis of their epistolary network could help to uncover figures whose role in their own culture (not to mention their residual role in ours) has been forgotten over time.