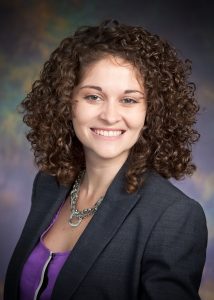 Professor Elizabeth E. Tavares joined the Department of English in Fall 2020 as part of the Hudson Strode Program in Renaissance Studies. Tavares comes to the Department from her prior Assistant Professorship at Pacific University near Portland, Oregon. With a wide range of talents and interests, she brings unique and contemporary approaches to researching and teaching early modern English theatre to the Department.

Tavares’s love of the theatre is rooted in her passion for music. She originally traveled from her home state of Hawai’i to the jazz hub of Chicago to study at DePaul University’s conservatory program. Tavares recounts that, as a child, when no babysitter was available, she often sat in pit orchestras at the community theatre where her mother played the flute, hiding under her mother’s chair during the performance. “This was always the best seat in the house,” Tavares says. This regular proximity to music and performance naturally fostered Tavares’ enduring fervor for the performing arts.

In Chicago, Tavares’s interests veered toward the study of performance as a subject and not only as a practice. She thus switched her undergraduate studies to English and History at DePaul University, eventually earning her MA and PhD in English from the University of Illinois at Urbana-Champaign.

Today, Tavares’s research focuses on early English drama, and she sometimes lends this expertise to professional theatre companies as an in-house researcher. Her current book project, The Repertory System Before Shakespeare: Playing the Stock Market, examines how early modern playing companies developed distinct “house styles” to distinguish themselves from other Elizabethan theatre troupes, and, in turn, cultivated returning audiences. In her book manuscript, Tavares investigates the dramaturgical features—such as stage props, costume design, or cosmetics—of various theatre troupes’ repertories in order to provide a more detailed sketch of the marketplace’s commercial operations than previously recognized.

Tavares likens these “house styles” to the films of Wes Anderson, a contemporary director known for his distinct aesthetic. While the existence of these house styles is highly debated, Tavares’s book reveals that they are not determined by “genre, theme, or a particular rhetorical aesthetic,” as the term is often understood to suggest. Rather, such styles, she says, “develop out of a particular material aesthetic” or dramaturgy.

Tavares has uncovered that props, cosmetics, wardrobe, and even special technologies define these house styles. The Lord Strange’s Men, for instance, applied certain cosmetics to represent characters of color in stories of global conquest long before England even thought of itself as an empire. These cosmetics allowed actors to light body parts and entire bodies on fire, a performance feature specific to just their company, building on the work of Lawrence Manley and others. Tavares’s research effectively reveals how the employment of props, such as a recycled large chariot, enabled theatre companies to establish distinct styles and generate returning audiences.

Tavares’s scholarship also provides her with unique approaches to education. She teaches many of the department’s sixteenth- and seventeenth-century literature courses, including those that focus on Shakespeare. She brings her research on dramaturgy to the classroom, employing performance and materialist approaches in order to contextualize historical theatre practices. She guides her students to analyze plays with location in mind, highlighting how performances mostly occurred outside the institutionalized theatrical space in places such as guild halls, inn yards, courts, and taverns. “We look at lots of images from the period,” she says, “and we get up and try to arrange our classroom to emulate the spatial affordances of a performance.”

To further enhance this experimentation with affordances of particular spaces, her classes also study the use of sound and memorization techniques, playing many “cue-script games” in class. Tavares points out how, during the Renaissance in England, actors were never given an entire playscript, which partly served to control copyright. “A company owned a play, and a scribe copied out just your part,” she explains. “So you only knew and memorized your own lines, and you actually didn’t know anyone else’s. We call this ‘part-learning’ or ‘cue-script learning’. You memorized your part and your cue line, which is usually about four or five syllables spoken by [another actor].” By conducting exercises in this process, Tavares helps students further experience what it was like to perform during the period, and it enriches their understanding of the plays as performances and not just as texts.

This hands-on approach is one of the most difficult challenges of teaching during the pandemic, Tavares says. “I love the theatre,” she states. “I love live theatre, live performance, festivals.” However, the ability to share the live components of theatre is something Tavares ardently misses, and she eagerly looks forward to bringing these crucial activities back to her classroom post-pandemic.

“It’s so rare to find a dedicated Renaissance program,” Tavares remarks of UA’s Strode Program. “And it’s also a program with powerful, wonderful women and many great scholars, all of whom are very warm and welcoming.” For Tavares, the Department of English as a whole is a great community of teachers, writers, and scholars.